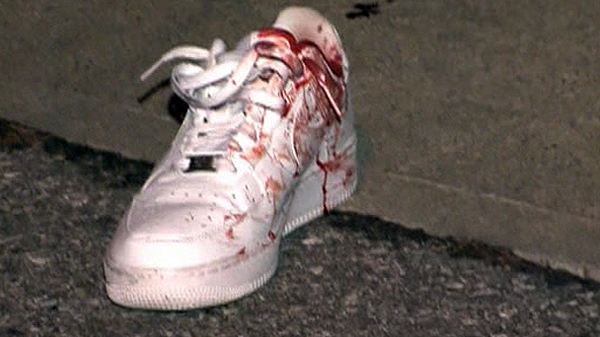 A bloody shoe left behind at one of eight shooting scenes in Toronto between Saturday, Nov. 20 and Sunday, Nov. 21, 2010.

The spate of shootings across the city over the weekend that left one person dead don't appear to be linked, a senior police officer said Monday.

"It is disturbing. We did have a spike in shootings this weekend," said Toronto Police Insp. Chris Fernandes.

"There is no intelligence to show any of them are related, but we are concerned,” said Fernandes, with TAVIS -- the Toronto Anti-Violence Intervention Strategy.

There were a total of eight shootings.

Melvin Gomez, 24, became Toronto's 54th homicide victim following a 2:53 a.m. Saturday shooting at the Col. Mustard bar in the Peanut Plaza off Don Mills Road, which is north of the Fairview Mall.

In a separate incident, a 16-year-old boy who had been standing at a bus stop at Dupont and Dufferin Streets early Sunday was critically wounded after shots were fired during a dispute between two other men.

On Saturday, police officers were on patrol in the vicinity of Oakwood Avenue and Earlsdale Avenue, which is located a few blocks south of Rogers Road.

They started to investigate several males who fled from police. Officers chased them on foot, police said Monday in a news release.

An 18-year-old man was allegedly found in possession of an unspecified quantity of cocaine and a knife, police said.

Jamal Garrison has been charged with possession of cocaine and three counts of failing to comply with a probation order.

A 19-year-old man was arrested after he stumbled and allegedly dropped a loaded .38-calibre revolver. Alex Frederick, of Toronto, faces a total of 11 charges, including:

The 17-year-old allegedly turned during the foot pursuit and pointed a semi-automatic pistol at the pursuing officer. Police allege he pulled the trigger, but that the pistol misfired.

The 17-year-old, who cannot be named due to provisions in the Youth Criminal Justice Act, faces a total of 13 charges. They include:

The trio made an initial court appearance on Sunday. No allegations have been proven against them in a court of law.

Fernandes said TAVIS officers confiscated five firearms on the weekend and have seized 53 in the past 30 days, he said.

"My officers took three firearms off the street up in the Chalk Farm area (northwest of Jane Street and Wilson Avenue) just by investigating three individuals," Fernandes said.

The three appeared in court on Saturday on firearms-related charges.

Fernandes said people should be concerned when spikes in gun violence occur, but added that they will unfortunately happen from time to time.