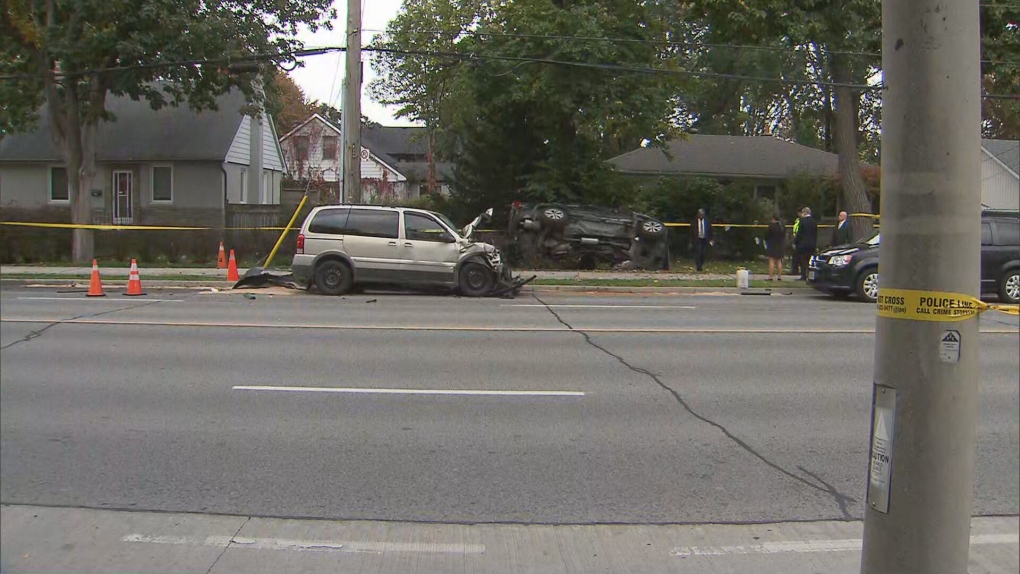 Police are investigating a collision in Etobicoke that left one person dead.

TORONTO -- A second arrest has been made in connection with a deadly collision in Etobicoke last week, police say.

The collision happened on Oct. 15 at noon at the intersection of Burnhamthorpe Road and Shaver Avenue North when a gold Pontiac Montana van and a black sedan were travelling west at a high rate of speed.

At that time, police said that a 59-year-old man was driving a black Honda CRV south on Shaver Avenue and was struck by the van as it entered the intersection.

Images from the scene appear to show the Honda rolled over onto its side in a ditch and the van all but totalled.

Police allege that the driver of the black sedan slowed down following the crash but eventually fled the scene and was last seen travelling westbound.

Images of the vehicle were released by investigators last week in an attempt to identify the driver.

In a news release issued Thursday,​ police said that they had successfully identified and arrested Toronto resident Samir Shams, 50.

Shams is charged with one count of dangerous operations of a conveyance causing death. He will appear in a Toronto courtroom on Dec. 9.

A day earlier, on Wednesday, Toronto police arrested 23-year-old Shabari Tull of Toronto in connection with the collision. Tull was charged with dangerous operations of a conveyance causing death. He will appear in a Toronto courtroom on Dec. 2

Police are asking anyone with information related to the investigation to contact them.