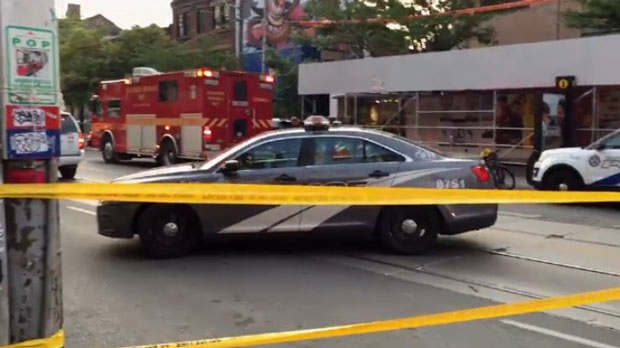 Police are shown at the scene of a shooting near Queen Street West and Peter Street earlier this month.

Editor's Note: The name and photo of the young person wanted in this case have been removed from the article following the expiration of a judicial authorization.

Police have identified a second person wanted in connection with a fatal shooting in Toronto’s Entertainment District over the Canada Day long weekend.

Toronto police issued a news release Thursday saying they had judicial authorization to identify a 16-year-old boy wanted for two counts of first-degree murder and one count of attempted murder.

The shooting took place outside Cube Nightclub, located near Queen Street West and Peter Street, around 8 p.m. on June 30.

Three people -- two men and a woman -- were struck with bullets.

Jahvante “Smoke Dawg” Smart, 21, and Ernest “Kosi” Modekwe, 28, both succumbed to their injuries. The 37-year-old woman is expected to survive.

Modekwe was described by family and friends as a music brand manager that worked with a hip-hop collective called ‘Prime.’ Smart was a rising rap artist who was a member of the same collective.

Investigators did not immediately say how many suspects they were searching for.

On July 11, police issued a Canada-wide warrant for 22-year-old Abdulkadir Handule of Toronto. He is wanted for two counts of first-degree murder and one count of attempted murder.

On Wednesday, police said they were not going to name the second person wanted in the investigation, but on Thursday investigators identified the young person.