Two men have died in hospital after a shooting at an apartment complex in North York on Tuesday night.

At around 9:30 p.m., police said that armed men began shooting toward the courtyard outside of a townhouse complex in the area of Jane Street and Grandravine Drive, and critically injured the two men, police said.

The victims were located with gunshot wounds, police said. They were rushed to hospital in life-threatening condition but both succumbed to their injuries.

Sources close to the investigation told CTV News Toronto that Rowe was one of the three gunman involved in the shooting, but his accomplices may have accidentally shot him before fleeing the area. 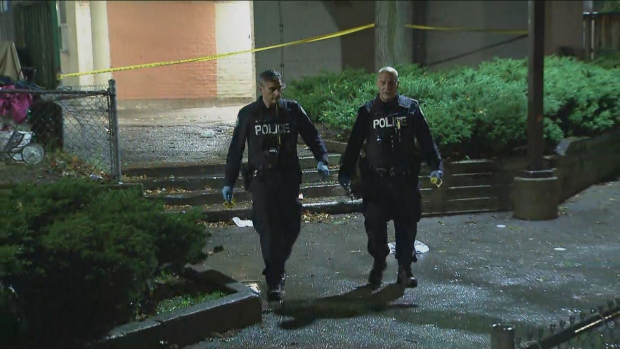 According to investigators, the armed men began firing shots around 8:21 p.m. in the area of Venetian Crescent, just south of the Jane and Finch Mall.

A 16-year-old boy was seriously injured by the gunfire, but managed to survive, police said.

Police said the same men then fired shots at homes in the area of Sheppard Avenue West at 9:04 p.m., but no one was injured.

A resident, who lives in the complex where the two men were shot, said her husband was nearly struck by the gunfire. She said he was cooking in front of a window when the gunshots rang out.

“He was by the kitchen frying up some stuff and … when it [a bullet] hit the window while he was cooking, the glass shattered behind him. And then he ducked down and went to the living room and when he went to the living, two more shots came through the window,” the resident, who identified herself only as Tiffany, said.

No suspect information has been released. Police are asking anyone with information on the incident to contact them.