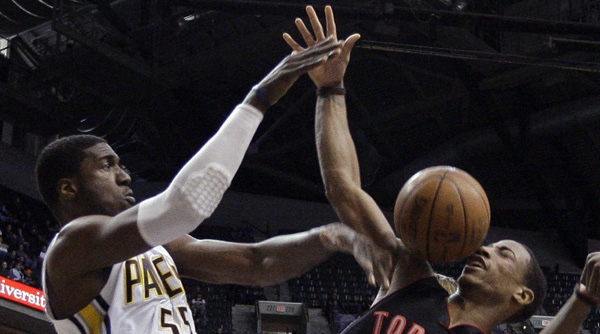 INDIANAPOLIS - Danny Granger and George Hill scored 18 points each as the Indiana Pacers took an early lead and held off the Toronto Raptors 103-98 Monday night.

Paul George had 15 points and Leandro Barbosa added 14 to help the Pacers -- third in the Eastern Conference -- win for the fourth time in their last five games.

Hill also had seven rebounds and four assists while making his first start of the season in place of the Darren Collison, who sat out with a groin injury sustained in Indiana's loss to Boston on Saturday.

Linas Kleiza scored 18 points -- all in the fourth quarter -- as the Raptors tried to rally from a 15-point deficit at the start of the period. Alan Anderson had 13 of his 17 points in the third quarter and Amir Johnson finished with 16 for Toronto. Ed Davis added 11 points and 10 rebounds and Jose Calderon had 14 assists.

Anderson and Kleiza gave the Raptors a chance in the second half. Kleiza scored 10 points as Toronto had a 17-4 run over the first 5:14 of the fourth to pull the Raptors to 81-79. However, the Pacers responded with a 14-6 spurt to increase the lead to 10 points with 1:43 to go.

Calderon had a 3 and Kleiza made two free throws to pull the Raptors to 95-90, but Hill made a 3 with 33.9 seconds remaining to seal the Pacers' win.

Hill scored five points and Granger had four as the Pacers closed the first quarter with 13-6 run to take a 21-16 lead. Dahntay Jones and A.J. Price hit 3s and Lou Amundson had an alley-oop dunk as Indiana scored the first eight points of the second to stretch the lead to 13.

Hill's jumper at the buzzer gave Indiana a 51-37 lead at halftime.