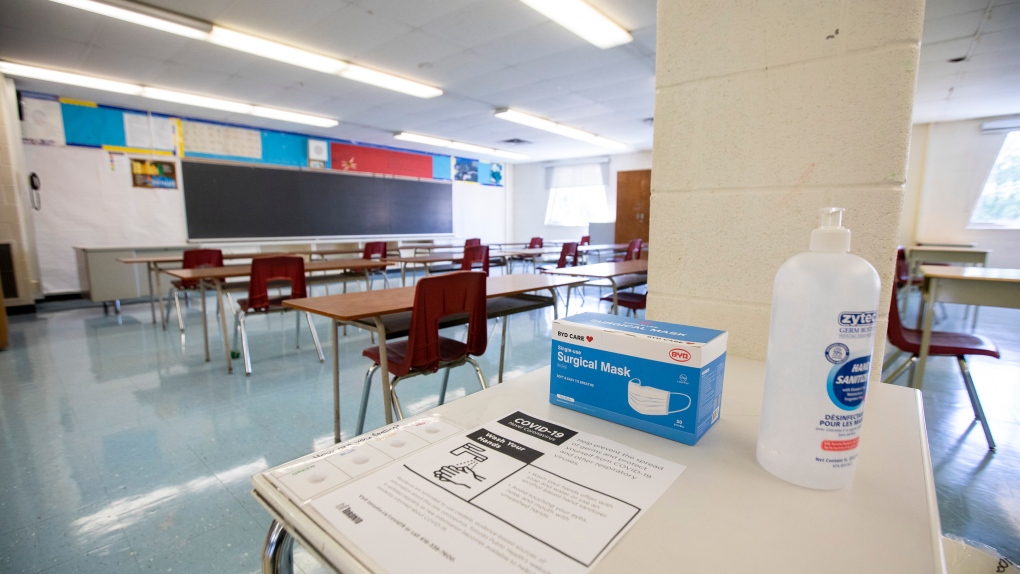 A physically distanced classroom with masks and hand sanitizer is seen at Kensington Community School amidst the COVID-19 pandemic on Tuesday, September 1, 2020. THE CANADIAN PRESS/Carlos Osorio
TORONTO -

Ontario teachers' unions are calling for mandatory COVID-19 vaccinations for eligible staff and students at the province's schools, saying the government's immunization policy for the sector doesn't go far enough.

The unions joined other stakeholders Wednesday in calling for stronger measures to fight off a rising fourth wave of the pandemic. The call came a day after the province said many health and education workers would either have to be immunized or regularly tested for COVID-19.

"To provide the greatest level of protection to Ontario's students and communities, we believe that everyone working in, or attending a school who is eligible and can be safely vaccinated, should be vaccinated," unions representing elementary, secondary, Catholic and French teachers said in a joint statement.

The unions said too few details have been provided about the education sector's policy, which is still being finalized by the government.

They also noted that the new academic year starts early next month, with students returning to classrooms amid fewer public health restrictions.

While the unions said accommodations should be made for those who can't be vaccinated for medical or religious reasons, they said individuals who aren't vaccinated should have to follow stricter safety protocols than others.

"A mandatory vaccination program with proper provincial direction would provide greater protection against the spread of COVID-19 in school communities and protect students," the unions said.

"As the fourth wave of the pandemic intensifies, the Ford government cannot continue to abdicate its responsibilities by downloading COVID-19 planning onto school boards at the last minute."

The government said Wednesday that education stakeholders, including unions, are currently being consulted on the policy.

A spokeswoman for Education Minister Stephen Lecce said the policy requiring weekly testing for unvaccinated staff has been welcomed by the province's science advisers.

"Our plan is designed to minimize disruption and maximize safety," Caitlin Clark said.

Leaders of opposition parties have also called for a mandatory vaccination policy ahead of the school year, arguing the government's plan won't protect young children who aren't yet eligible for the shots.

The province said one way it was supporting a safe return to school was by allowing children born in 2009 to get the Pfizer-BioNTech COVID-19 vaccine starting Wednesday. That shot had previously been limited to those aged 12 at the time of their vaccination.

The province said it widened eligibility to 11-year-olds who will turn 12 this year after monitoring data from Alberta and British Columbia, which didn't identify risks after administering the shot to that age group for months.

The government's vaccination policies for many health workers mirrors one that already took effect months ago in Ontario's long-term care homes, which were devastated by COVID-19.

The Ontario Long-Term Care Association has since called for vaccination to be made mandatory for all direct health-care providers -- an ask CEO Donna Duncan repeated following the government's Tuesday announcement.

Duncan said a consistent policy across the health-care system will prevent organizations from losing staff to other jobs.

She also welcomed news that long-term care residents, along with other individuals considered high-risk, would become eligible for third COVID-19 shots to boost protection against the virus.

The Ontario Retirement Communities Association called on Wednesday for the government to extend eligibility for third-dose boosters to all retirement home residents as well.

Cathy Hecimovich, CEO of the group, also encouraged Ontario to look to provinces with "even more rigorous" mandatory staff vaccination requirements after the government said it was working on immunization policies for retirement homes.

Meanwhile, a large Toronto hospital network that earlier this month introduced a staff vaccination policy that reflected the province's new minimum standard said it was looking into stronger measures.

The University Health Network said 950 people indicated they were not vaccinated or chose not to declare their status. Spokeswoman Gillian Howard said some of them refused to take COVID-19 tests before coming to work and went on leave.

She said the hospital network is now looking at requiring vaccination for staff, with unpaid leave as a last resort.

"No one wants that to happen but we work with some of the most immune-compromised patients and for their safety and that of our staff, we are doing everything we can to have people vaccinated," Howard said in a statement Wednesday.

Ontario reported 485 new COVID-19 cases and three more deaths from the virus on Wednesday, with a majority of the cases among unvaccinated or partially vaccinated people.

The province has seen an upward trend in daily infections recently driven by the highly contagious Delta variant and Ontario's top doctor has warned that it will be "a difficult fall."

Eighty-one per cent of Ontarians aged 12 and older have received one dose of a COVID-19 vaccine and 73 per cent have both shots.

This report by The Canadian Press was first published Aug. 18, 2021.