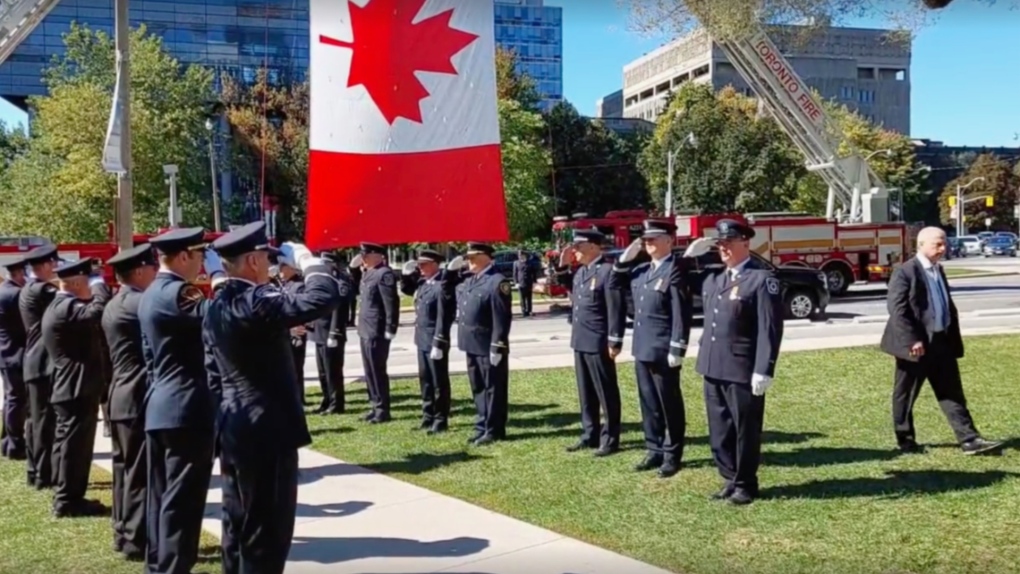 At the memorial service for Ontario's fallen firefighters in downtown Torontno. (ONFireChiefs/Twitter)

Ontario’s fallen firefighters from the last two years were honoured during a memorial service in downtown Toronto Sunday afternoon.

The ceremony started at 1 p.m. at the Ontario Fire Fighters Memorial on College Street, just south of Queen’s Park.

“I’m very, very thankful that we can all gather today to remember the brave women and men who gave their lives protecting us,” Ford said. “They’re all heroes who made the ultimate sacrifice in the name of duty and service to their community, and while they’re no longer with us, their honour and sacrifice will never be forgotten.”

“Let me thank you all from the bottom of my heart. We’re forever grateful for your service,” he said.

Today the Province of Ontario honors and remembers our fallen firefighters who sacrificed their lives in the line of duty protecting the lives and property of the people of Ontario including 28 from the City of Toronto who made the ultimate sacrifice. pic.twitter.com/TBlMS4vMTV

Ontario Fire Marshal Jon Pegg also spoke at the gathering, and said today’s memorial service pays tribute to all of Ontario’s firefighters who made the “ultimate sacrifice.”

“For the 36 names being added to the memorial this year, and the 98 names that we are also honouring today, we are forever indebted to their service,” he said. “Their loss is felt deeply by their families, their fire departments, and the entire community that they pledge to protect.”

The names of all the fallen firefighters were read aloud to reflect and honour the sacrifice they each made to their community. A bell rang after each name as part of the tradition that firefighters have to pay their respects, as well as at the end of the ceremony.

“When the fire was out and the alarm had come to an end, it was the bell that signalled to all the completion of that call,” the Ontario Professional Fire Fighters Association said. “When a firefighter dies in the line of duty, it is the toll of the bell that solemnly announces a comrade’s passing.”

The names of 36 fallen firefighters will be added to the Memorial Wall, in addition to the 98 names of those who were lost in 2020 and 2021. This is the first time in the last two years Ontario could pay tribute to its fallen firefighters in person due to the COVID-19 pandemic.