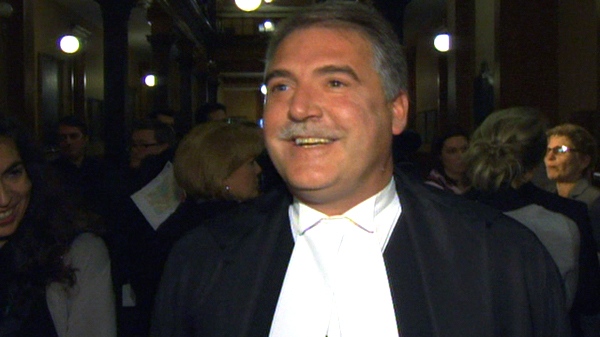 TORONTO - If you want to know who's been calling the shots in the Ontario legislature over the past few years, look no further than the footwear.

Below the sombre black robes that mark Speaker Steve Peters' position as Ontario's chief political referee are a pair of purple high tops -- a parting gift from the legislative interns.

It's a cherished addition to the history buff's vast collection of Converse sneakers. But the shoes also offer a glimpse at the down-to-earth personality who put a modern stamp on the job, while staunchly defending the province's oldest democratic traditions.

It's not unusual to see the store clerk turned politician offering spontaneous guided tours of Queen's Park, or playing peacemaker in his lush legislative apartment -- one of the perks of the job -- to the province's warring parties.

Over the weekend you might catch the 48-year-old Peters playing hide-and-go-seek with his young nephew, dodging into ancient elevators whose grinding wheels often give him away.

But after almost four years, Peters is turning in his robes and leaving the cavernous building his family has teasingly dubbed "the castle." The former Liberal cabinet minister from St. Thomas, Ont., is sitting out the Oct. 6 election and retiring from public life.

As he says goodbye to his beloved pink palace, there are a few words of wisdom Peters wants to impart to the next slate of elected politicians.

Take a good look at yourselves.

Whether it's a provincial legislature or the House of Commons in Ottawa, the public is watching the people they've elected to represent them and wondering what on earth they're up to, he says.

"They see the screaming and hollering at one another," Peters says in a wide-ranging interview with The Canadian Press. "I wish more members would actually go home . . . sit down and watch it on television and look at how it comes across. Or go sit up in the gallery."

Students and teachers who visit the legislature during the daily question period -- an often raucous hour where opposition parties fire off questions to the government -- have emailed him "expressing their disappointment" in how the members act.

But it's up to the party leaders to set the example, he says.

"The leaders need to say to their members, 'Look, we have got to change our tone in this place'," he says. "And I think if the leaders put down the law, put down their foot within their own caucuses, I think that could go a long way to toning down some of the incidents in the place."

Retiring deputy speaker Bruce Crozier shares those concerns. The level of debate has deteriorated since he was first elected 17 years ago, he said.

"I think because the partisanship has increased, and the 'Gotcha!' mentality of the legislature has increased to the detriment of just good quality debate," Crozier said.

Peters admits he was no angel either when he served in the Opposition benches and as a Liberal cabinet minister. He was even kicked out of the chamber twice for misbehaving.

But his experience on both sides of the house provided some insight when it was his turn to enforce the rules.

"I've tried really hard to instil in the members that debate is healthy and criticism is healthy, but to not bring it to a personal level," Peters said. "And I've jumped at every opportunity where a member has crossed that line."

He knows the opposition better now than he did as when he was in cabinet, and that's largely because of the combative environment that politicians work in, he said.

One of the things he tried to do as the non-partisan speaker was revive an old tradition of inviting members from all three parties to his legislative apartment for dinner, he said.

"A dinner with no politics," he added. "And there's been some really amazing evenings up there where people from all sides have gotten to know each other better, but in an environment that isn't the cut and thrust of a question period."

Peters brought a lot of energy to his job as Speaker, Crozier said. His tenure was also marked by his passion for the legislature's history and his enthusiastic promotion of all things Ontario -- from food to wine to the 40 white trilliums he had planted on the front lawn.

Peters, who earned $153,000 in 2010, also maintained decorum and put the responsibility on members to behave, said NDP Leader Andrea Horwath.

"Although he gave everybody their room to let off some steam when necessary, he also made it very clear that he expected a level of respect and debate that was respectful," she said. "He forced us, I think. In some cases, forced some of us kicking and screaming into that respectful tone. And I think that was valuable."

But there is one challenge Peters couldn't overcome, despite all the power his office holds.

He failed to save the legislature's impressive vista from being permanently marred by high-rise condominiums, even after pleading with his own party to stop the development.

"I will forever be disappointed in the government for not stepping in and preserving that skyline," he said.

The governing Liberals could have declared a provincial interest to protect the grand view of the 118-year-old building. But they refused, despite using the same tool in the past month to halt the development of a quarry in a Liberal Ted McMeekin's riding.

"That's important, and I recognize that that's important to those people in that area," Peters said. "But this is a building that belongs to the people of Ontario, and that vista is forever going to be gone and there was an opportunity to step in."