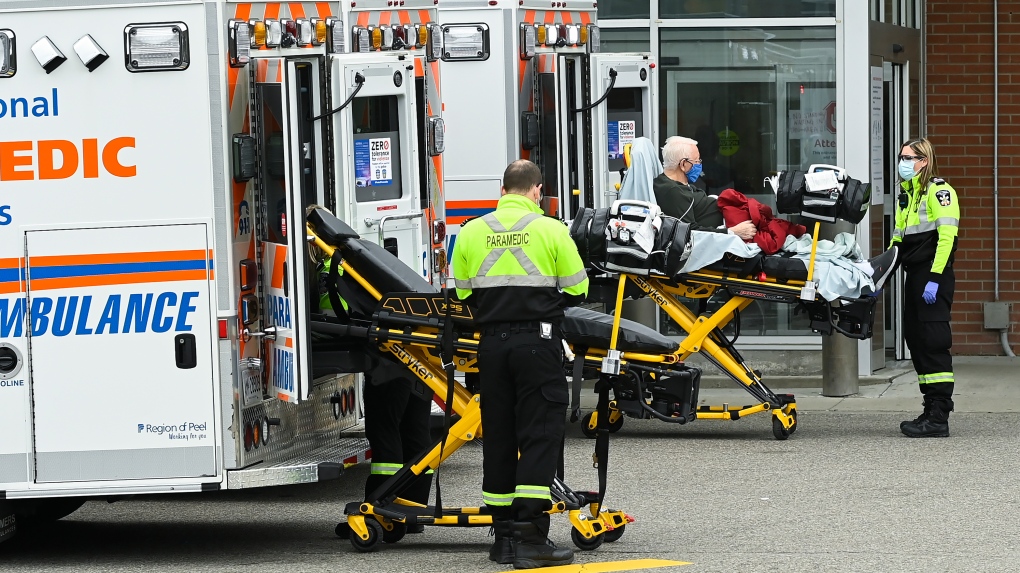 Paramedics transport an elderly man to the hospitals emergency department during the COVID-19 pandemic in Mississauga, Ont., on Thursday, November 19, 2020. Ontario has entered the second wave of coronavirus infections. THE CANADIAN PRESS/Nathan Denette

The 1,708 new infections are down from Saturday’s total when 1,822 cases were added.

Sunday’s report brings the total number of COVID-19 cases in Ontario to 114,746, including deaths and recoveries.

Twenty-four more COVID-19-related deaths were recorded in the province in the last 24 hours, pushing Ontario’s death toll to 3,648.

As well, 1,443 more cases are now considered to be resolved by the province. In total, 97,319 people who have contracted the novel coronavirus have recovered.

With 53,959 tests completed in the last day, Ontario’s COVID-19 positivity rate stands at 3.7 per cent. The province has completed 6.2 million tests since the start of the pandemic. At least 38,724 tests remain under investigation.

According to the province’s daily epidemiologic summary, 652 of the new infections were reported in people between the ages of 20 and 39. That age group now accounts for 41,815 lab-confirmed infections, the most of any age group in Ontario.

Seventy new cases were reported in people 80 years of age and older.

Most of the new cases added Sunday were found in Toronto and Peel Region.

Peel reported 503 new cases while Toronto reported 463. Both regions are currently placed in the lockdown stage of the province’s COVID-19 framework which prohibits most non-essential activities, including the use of gyms and onsite dining at restaurants.

Those measures went into effect on Monday and are scheduled to last for at least 28 days.

The only other region to report new case numbers in the triple digits is York Region with 185 cases. York Region is currently in the “red zone” of the province’s COVID-19 framework which caps the size of indoor gatherings and dine-in service at restaurants and bars.

The City of Hamilton, Waterloo and Durham Region are also in the “red zone” and all reported at least 60 new infections.

Ottawa reported 79 new infections and is currently placed in the “orange zone” which allows for 50 people to be seated indoors at one time at a restaurant.

There are currently 586 people in hospital with COVID-19 symptoms. The province did not list how many of those patients are being treated in an intensive care unit.