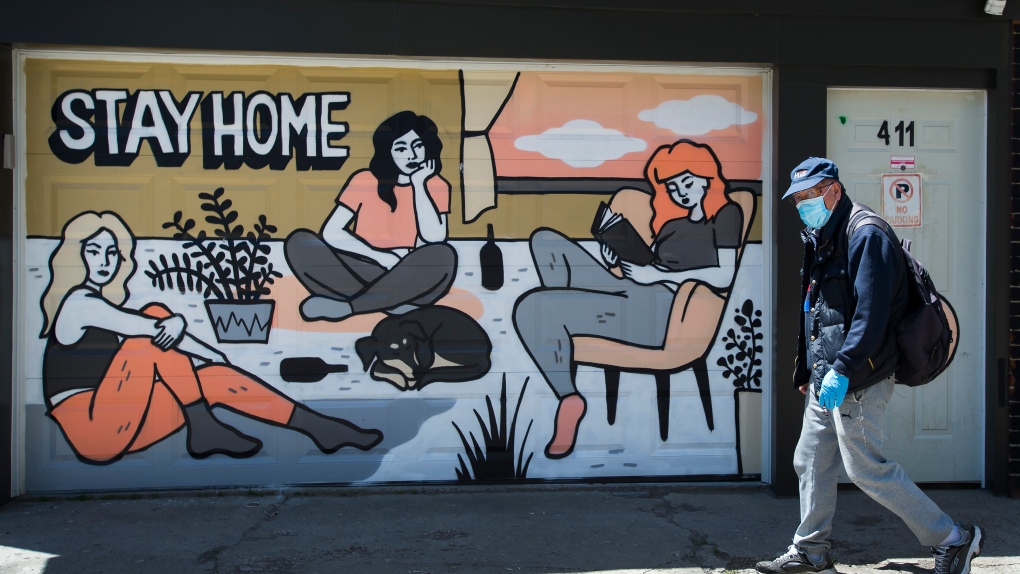 A man wearing a mask walks past a mural made by artist Emily May Rose during the COVID-19 pandemic in Toronto on Friday, May 22, 2020. THE CANADIAN PRESS/Nathan Denette

TORONTO -- Most of Ontario’s public health units, with the exception of Toronto, Peel and York, reported five or fewer cases of COVID-19 in the last 24 hours, the province’s health minister said.

Officials confirmed an additional 165 new cases of the novel coronavirus on Friday, a slight increase from the 153 cases recorded on Thursday and the 149 cases on Wednesday.

This marks the fourth straight day where the daily reported number new infections has fallen below 200.

Friday also marks the lowest daily death count since March 25, with only two more deaths related to COVID-19 reported in the last 24 hours.

Ontario Health Minister Christine Elliott said that 14 of the province’s public health units have reported no new cases of COVID-19.

According to Friday’s epidemiology report, 87 of the 165 COVID-19 cases were in Toronto, while 23 were in York Region and 22 were in Peel Region.

Windsor-Essex, a region that has grappled with outbreaks among migrant workers, has reported three new cases.

The new infections bring Ontario’s total number of lab-confirmed cases of the disease to 35,535, including 2,682 deaths and 30,909 recoveries.

The majority of deaths to date have been reported in people over the age of 70, while only one person under the age of 19 has succumbed to the disease.

As of Friday, there were 155 people in the hospital due to COVID-19. Forty of those patients are in the intensive care unit and 25 of them are breathing using ventilators.

Ontario health officials have conducted more than 1.4 million tests for the disease since the pandemic was declared.

More than 15,000 tests are still under investigation.