TORONTO -- The Ontario government has released a detailed list of people who will be prioritized for the COVID-19 vaccine in Phase 2 of the province’s distribution plan, which officials say focuses on age and at-risk groups.

Speaking to reporters on background Friday, officials said the province is still on track to begin Phase 2 of the vaccination plan in April.

About 9 million Ontario residents are expected to receive their first dose of a vaccine in this phase, which is expected to be complete by at least July.

Under Phase 2, the government will begin mass immunization of adults between the ages of 60 and 79 (in declining five-year increments), people in high-risk congregate settings, individuals with high-risk chronic conditions and their caregivers, people who cannot work from home and at-risk populations.

The list of individuals eligible for the vaccine in Phase 2 has expanded since it was first released in mid-January to encompass more at-risk groups and to take COVID-19 hot spots into account. Officials say they hope the adjustments will prevent deaths, hospitalizations and admissions to the intensive care units.

On Friday, officials released a detailed list of who will be eligible for the vaccine in Phase 2 based on each categorization:

Based on health conditions

Vaccinations for individuals based on highest-risk health conditions are expected to begin in April.

Based on congregate settings

Vaccinations based on congregate settings are expected to begin in April along with essential caregivers.

Employees who cannot work from home

Vaccinations based on employment is expected to begin in June.

Hot spots with high rates of death, hospitalizations and transmission

Some public health units will receive up to 920,000 doses of the vaccine to target hot spots, with a continued age focus.

Here are the priority regions:

Officials stressed that the timeline presented on Friday is dependent on vaccine supply.

Where are we in Phase 1?

The province is still moving through Phase 1 high-priority groups in its vaccination efforts.

More than 820,000 doses of the COVID-19 vaccine have been administered so far, with more than 260,000 Ontarians fully immunized.

Ontario is preparing to move into Phase Two of our #COVID19 vaccination distribution plan in April, with over 2M doses to be delivered by the federal government by the end of March. Phase Two will focus on vaccinating populations based on age and risk. https://t.co/sW75W9BADC pic.twitter.com/ZLgMG8qfdB

Both the Pfizer-BioNTech and Moderna vaccines require a second dose to be fully effective. The National Advisory Committee on Immunization recently recommended that health officials can extend the interval for the second dose to about four months instead of the typical 21-day or 28-day wait.

Ontario officials have said it will move to this recommendation as of March 10, “with some limited exceptions.”

“This will allow Ontario to rapidly accelerate its vaccine rollout and maximize the number of people receiving first dose within a context of limited supply,” officials said in a presentation.

Speaking to reporters on Friday afternoon, the head of the COVID-19 vaccine task force in Ontario said the province has seen a “seismic shift in our vaccination opportunities” over the past week.

On Feb. 26, the AstraZeneca vaccine was approved for use by Health Canada. Ontario is expected to receive 194,500 doses of this vaccine next week and will be given to people between the ages of 60 and 64.

Ontario is also expecting about 173,160 doses of the Pfizer-NioNTech vaccine next week and 174,330 doses for the next two following weeks.

The province is also expecting about 160,500 doses of the Moderna vaccine next week and 323,200 doses the following week.

A fourth vaccine was approved by Health Canada on Friday. Johnson & Johnson’s COVID-19 vaccine only requires one dose for full immunization, something Hillier called a “game-changer.”

How will people get the vaccine?

Provincial officials said they expect about 80 per cent of vaccinations in Ontario to take place at an immunization clinic in Phase 2 and Phase 3. 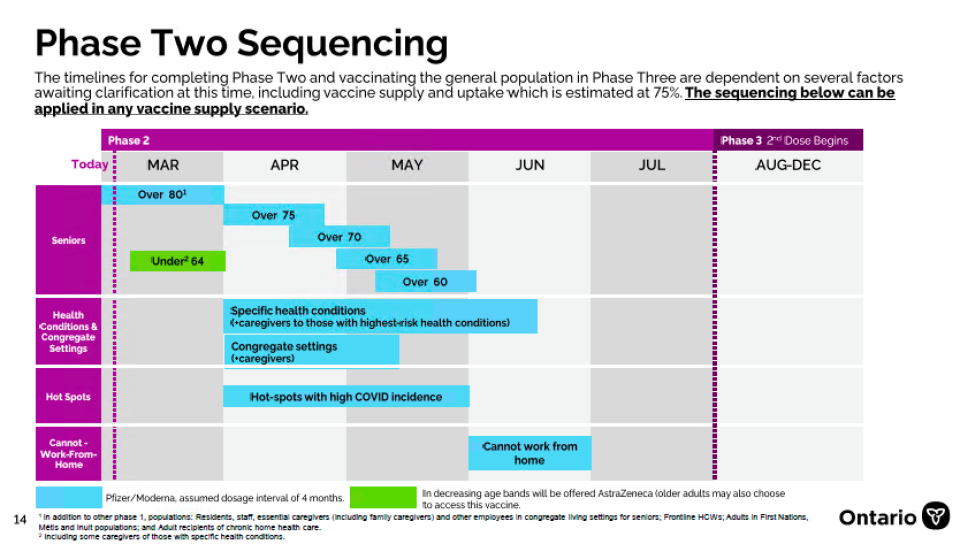 The start date for the province’s online booking system and call centre remains the same—March 15. If public health units want to begin mass immunizations at an earlier date, they will have to use their own systems.

The booking system is being tested in six regions across Ontario until March 8, and as of 7:40 p.m. on March 2, has been used by 308 residents.

The province has earmarked the time between March 8 and the launch on May 15 as “process improvement” time. 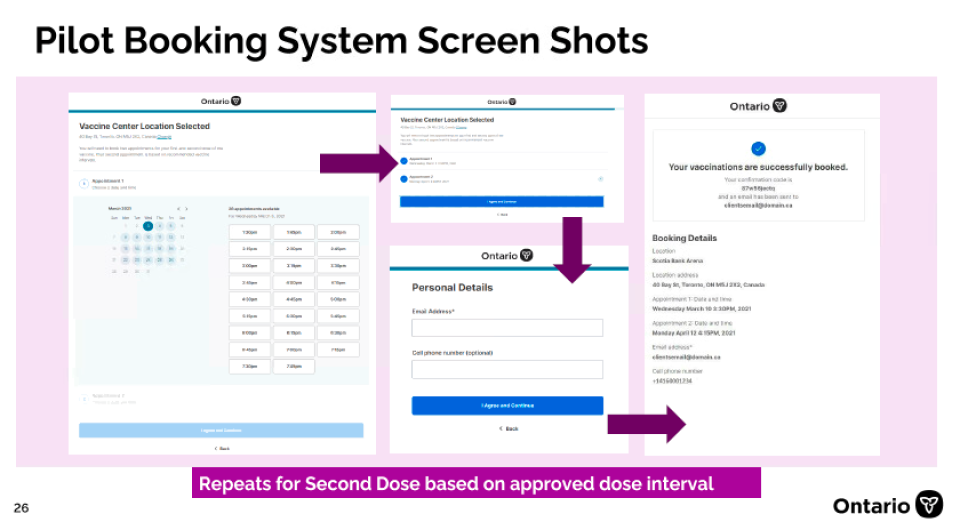 The province will also be launching a pilot program in Toronto, Windsor and the Kingston, Frontenac and Lennox & Addington region that utilizes pharmacies and primary care providers to administer shots.

Pharmacies will use their own booking systems to schedule vaccination appointments. The majority of AstraZeneca vaccine doses are expected to go to both pharmacies and primary-care providers.

While officials refused to provide a date for when all Ontarians may receive the first dose of the vaccine, Hillier optimistically challenged officials to get a shot into the arm of every person in the province by June 20, the first day of summer.

“I want to say by the first day of summer, we want to have, vaccine supply dependent, we want to have a first needle in the arms of every person in Ontario, who is eligible for the vaccine, and who wants to get it.”

Under the current timeline presented by health officials, those over the age of 60 are expected to receive their first dose of a vaccine by the end of May. The timeline does not include a lot of information regarding the AstraZeneca vaccine, which will begin being administered to those between the ages of 60 and 75 this month.

Hillier added that with both the AstraZeneca and the new Johnson & Johnson vaccine, he hopes the province can “crush those timelines.”