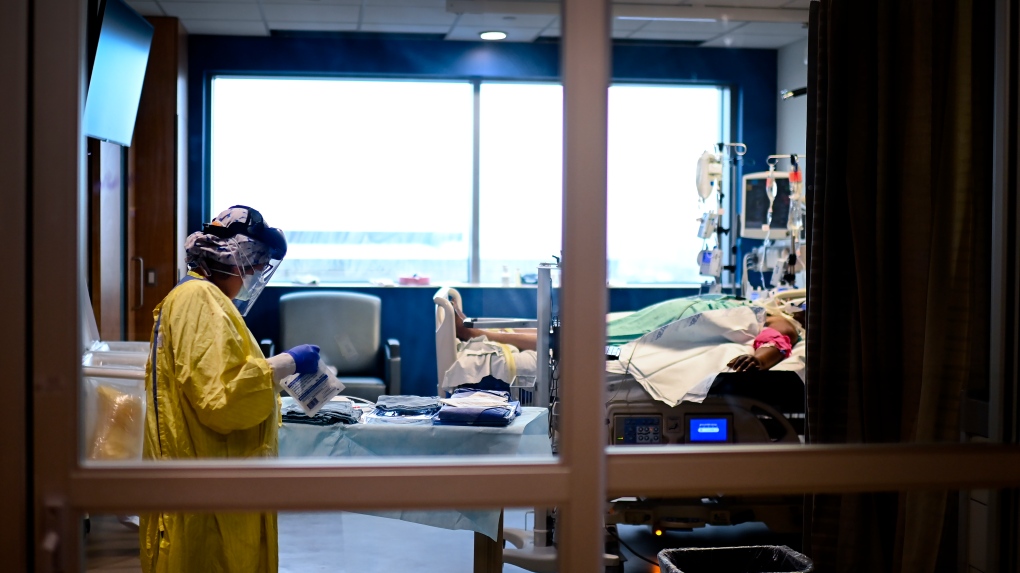 An ICU health-care worker shown inside a negative pressure room cares for a COVID-19 patient on a ventilator at the Humber River Hospital during the COVID-19 pandemic in Toronto on Wednesday, December 9, 2020. THE CANADIAN PRESS/Nathan Denette

Eighteen of those deaths occurred in the last 24-hour period, pushing the province’s COVID-19 death toll to 4,377. Fourteen of those who died were residents of a long-term care facility.

As well, 2,005 more cases are now considered to be resolved by the Ministry of Health. At least 147,178 people who contracted the novel coronavirus have recovered since the beginning of the pandemic.

Sunday’s report marks the thirteenth straight day in which the province has recorded more than 2,000 new cases of the disease.

The news comes a day after the province confirmed it found the first two cases of a new variant of COVID-19 in Ontario. The variant was identified in a couple from Durham Region, Ont. who had been in contact with a recent traveller from the U.K.

First discovered in the U.K., the new strain has also been seen in Denmark, Japan, Israel and Sweden.

Meanwhile, for the third day in a row, the number of COVID-19 tests processed in Ontario over the last 24 hours was not made available by the province.

Yesterday, a province-wide lockdown began in an effort to curb the spread of infection and saw most non-essential businesses close their doors.

The lockdown is slated to last until at least Jan. 9. Lockdown restrictions will remain in effect for all 27 public health units in Southern Ontario until Jan. 23.

Right now, there are 823 patients in hospital with COVID-19, up 65 patients from Saturday.

However, the province says that more than 10 per cent of hospitals did not report patient data and expects the number of hospitalizations to increase in the coming days as a result.

Of the patients in hospital, 285 are currently being treated in an intensive care unit (ICU) and 194 are breathing with the assistance of a ventilator.

Health officials have said in the past that when there are more than 300 COVID-19 patients in the ICU, medical care not related to the disease becomes nearly impossible to handle.

COVID-19 modelling data released by the province last week showed that Ontario is expected to surpass 300 patients in intensive care by the end of December.

An earlier version of this story said that the infected couple had no known travel history, exposure or high-risk contacts.

However, the province said Sunday that after additional investigation and follow-up case and contact management it has been revealed that the couple had indeed been in contact with a recent traveller from the U.K., which is new information not provided in earlier interviews. They say the cases and contacts have been informed and are now in self-isolation as per public health protocols.