TORONTO -- More than a year after a state of emergency was first declared in Ontario, nurses are feeling underappreciated, undercompensated and under respected—feelings heighted by knowledge of a temporary COVID-19 pay scale being used by physicians redeployed to work alongside the “health-care heroes.”

Over the past month, the number of patients in Ontario hospitals being treated for COVID-19 has been in the quadruple digits daily. Admission in the province’s intensive care units (ICU) reached an all-time high of 900 at the start of the month and as of Friday sits at about 853.

Of those patients, 611 are breathing with the assistance of a ventilator.

Since the beginning of the pandemic, health-care workers treating these patients have been referred to by politicians as “heroes” deserving of nightly clap-outs and a 16-week $4 pandemic pay during the first wave. As Ontario battles its third wave and works to prevent a potentially devastating fourth wave, these same health-care heroes say they are burnt out.

“They're exhausted, they're angry, they're frustrated,” Vicki McKenna, President of the Ontario Nurses Association (ONA), said in an interview with CTV News Toronto. “It's hard for them to get respite, because if they don't pick up overtime, they know that their peers are working short.”

In response to the surge of ICU patients and hospital admissions, the Ontario government has enacted a number of COVID-19 emergency protocols, including the cancellation of elective surgeries and the redeployment of other health-care professionals to help in critical areas.

While the redeployment of staff was a policy meant to help alleviate staffing concerns as health-care workers struggled to keep up with an increasing demand, McKenna says that the vast differences in pay for similar work has left many nurses uneasy.

“Everyone should be acknowledged in the system, and they're not. And that's what's causing the frustration and the anger and the feeling like they're, you know, kind of disposable.”

Physicians redeployed due to a COVID-19 outbreak receive what’s called “temporary physician funding” from the government, something that was negotiated between the province and the Ontario Medical Association (OMA).

In an April 2020 memo, which was obtained by CTV News Toronto, officials say the payment structure “will allow for a more flexible response for physician services to the anticipated levels of patient care that will be required during surge state volume.”

According to the pay scale, a physician deployed to the ICU between 7 a.m. and midnight will receive $385 an hour, or $450 an hour for the midnight to 7 a.m. shift.

Someone in Ward Care could get $250 an hour from 7 a.m. to midnight while administrative non-clinical assignments are given the price tag of $165 an hour.

It is not known whether this pay scale has changed since it was originally negotiated last year.

A registered nurse working in an Ontario hospital who has 25 years of experience, on the other hand, receives a rate of $48.53 an hour regardless of where they work, as of April 2021. A nurse with five years of experience makes $40.19 an hour.

Both the OMA and the Ministry of Health say the temporary physician funding does not include any COVID-19 specific incentives and that it is based on the standard fee-for-service agreements used by doctors. 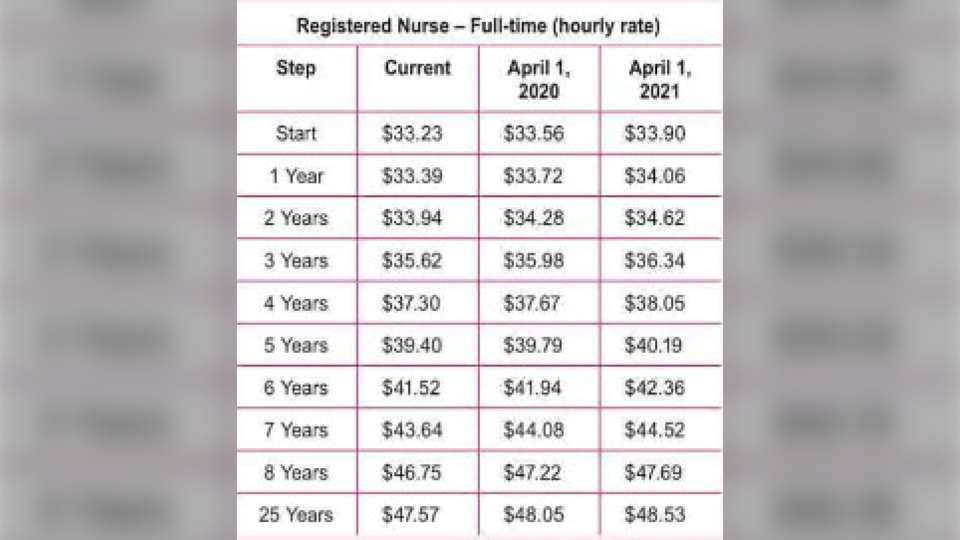 When asked about the temporary physician funding, the Ministry of Health said the government “remains committed to working with our sector partners to support our valued front-line health care workers and ensure the health and well-being of Ontarians.”

McKenna added that while physicians deserve to be compensated according to their specialized skills and extra years of education, to see the difference between the two salaries at a time in which physicians are working alongside nurses is “surprising.”

“It's the principle of the issue,” she said. “(Nurses) are leading teams of physicians, who include sometimes physicians who are not familiar with the area or the patient population, and other nurses who are coming to help but are not familiar, so they are leading teams and overseeing the work of other health-care providers as well. They are taking on this extra role and taking the responsibility for that with no real acknowledgement.”

“It's hard, you know, to look over at a colleague, a team member, who you are overseeing, who you know is making substantively more than you are.”

'A SLAP IN THE FACE FROM THE GOVERNMENT'

According to one Toronto ICU nurse, who did not want to be identified for fear of repercussions, many of her colleagues feel as she does—disappointed.

“We were the ones responsible to ensure they were trained and knew how to function appropriately in ICU. I think that made things even worse as well because already we're so stressed out with everything going on and we're spread so thinly and now we have to worry about watching over someone else and training them,” she said.

“So as much as we appreciate all the help and support that we can get, I just don't think it was given or delivered in a way that's beneficial.”

The nurse added that the point of discussing the funding is not to pit doctor against nurse or to claim that physicians do not deserve the pay they are receiving, but rather to shed light on the fact that nurses are not receiving appropriate compensation for doing the same work with added responsibility.

After witnessing so much trauma over the last year, the nurse said she has had to move from working full-time to working part-time—and she isn’t alone in making that transition.

“I didn't sleep for three weeks after a traumatic experience at work with these patients. Many people have had to take leave. Many people are dropping down to part-time because they just can't manage mentally outside of work.”

“I know it may sound superficial to say getting some sort of pandemic pay (would help), but it would be nice to be compensated financially for how hard we're happy to be working, especially if the government can afford to compensate some, I feel like it should be an all or nothing thing.”

The Ontario government did institute a “pandemic pay” in April 2020 offering some health-care workers $4 more an hour for a period of 16 weeks. At the time, the government said that the average full-time worker would receive an additional $3,560 in additional compensation over those four months.

Not everyone was eligible for the pandemic pay, however, leading to criticism from various health-care sectors and an expansion of the list of who could receive the compensation at a later date. 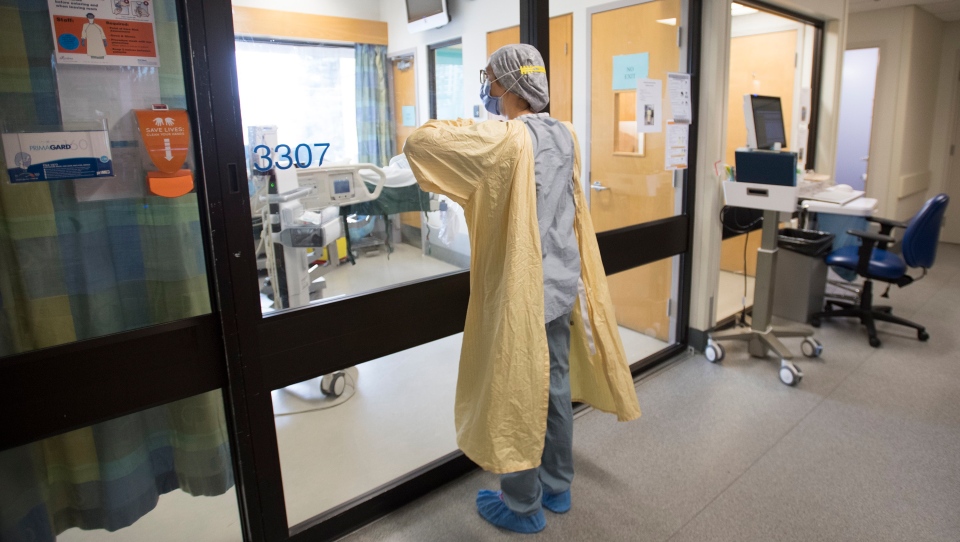 Since then, the number of patients being treated for COVID-19 in Ontario intensive care units has skyrocketed. In the height of the first wave, the number of ICU patients hovered around the 300 mark—a milestone public health experts warned would make care not related to the disease difficult to handle.

The frustration is compounded by the fact that nurses cannot bargain with employers to increase their salaries by more than one per cent, as there is currently a wage cap set by the provincial government.

Bill 124, also known as the Protecting a Sustainable Public Sector for Future Generations Act, passed in 2019 prior to the beginning of the pandemic. The legislation limits salary increases to one per cent a year for a period of three years.

The bill cites “the province’s fiscal health” as the reason for its implementation.

The ONA has launched a charter challenge against the bill, but McKenna said it will “take time” for it to come to a resolution.

"Despite saying nurses are heroes, the Ford government has continued to bully nurses and has eliminated their right to effectively collectively bargain.

Ontario nurses have not had an increase on par with inflation in more than a decade."

More than 1,200 people have signed a petition created on Thursday by an ICU nurse calling for an exemption to Bill 124 and financial compensation for nurses during the pandemic. The creator of the petition also wrote an open letter to the Ontario government saying that nurses feel “undervalued.”

The letter makes reference to the physician funding model and says that redeployed doctors are supporting “nursing efforts” such as cleaning patients, turning of patients and “other activities of daily living.”

“Due to the increasingly difficult and dangerous work we are tasked with, we feel that words of encouragement are no longer enough to appease us,” the letter reads. “There must be systematic changes within the Ontario health-care system to not only increase patient safety but retain the staff that you deem as valuable to keep fighting the pandemic.”

“Our government values the contributions of Ontario’s health-care workers, who provide patients with timely, safe and equitable access to high quality care,” a spokesperson for the Ministry of Health said in a statement while making reference to its $52 million plan to “recruit, retain and support” health-care workers as part of its COVID-19 Fall Preparedness Plan.

“We also acted swiftly to ensure our health care workers were recognized for their work through programs like pandemic pay. The program provided stability at the peak of the crisis, enabling us to put measures in place to prepare for any future outbreaks, surges or waves.”

The ministry did not say if they would consider an exemption under Bill 124 or if they would look into implementing further pandemic pay to support health-care workers.

Next week is considered “National Nursing Week” in Canada, something that McKenna hopes will spur the government into stepping up and supporting the profession.

“What better timing could you have,” McKenna said.