TORONTO -- A Mississauga man wants COVID-19 safety protocols to be thought through with more compassion after he says he was sent away from a walk-in clinic with a very painful hand because he didn’t have a cellphone.

Pete Vojeckis says he takes the pandemic seriously and was happy to wait in the parking lot rather than the waiting room and be called in. But he’s calling for common sense — because, he says, he could be called in verbally rather than over the phone.

“It seems like it’s pretty unfair if they’re going to exclude people from medical treatment if they don’t have cell phones,” Vojeckis, who is on disability, told CTV News Toronto. “That’s really wrong, you know.”

It’s a case that has observers reminding policymakers that technological solutions that work for many people don’t necessarily work for everyone, and people who don’t have cellphones for a variety of reasons shouldn’t be left behind.

Wayne Sumner, a professor emeritus at the Joint Centre for Bioethics at the University of Toronto, said that’s especially important as cellphones become tools used in COVID-19 contract tracing and could be part of a digital vaccine passport system.

Vojeckis says he bent his fingers backwards last week. “It hurt a lot and I thought I broke something. It swelled up like a boxing glove.”

He went to a walk-in clinic at Hurontario St. and Queensway. He says staff asked him to wait outside as part of a COVID safety protocol, and they would call him when they were ready.

But when Vojeckis said he didn’t have a cellphone, he says the staff told him to go to the nearby Trillium Health Partners hospital — something he wanted to avoid in case there were COVID cases there.

He says he suggested calling him verbally, in person, maintaining physical distance — but was shut down.

“She turned me away because I don’t have a cellphone,” Vojeckis said. “It’s not a very good thing to be forced to have technology for the simplest things like health care.” 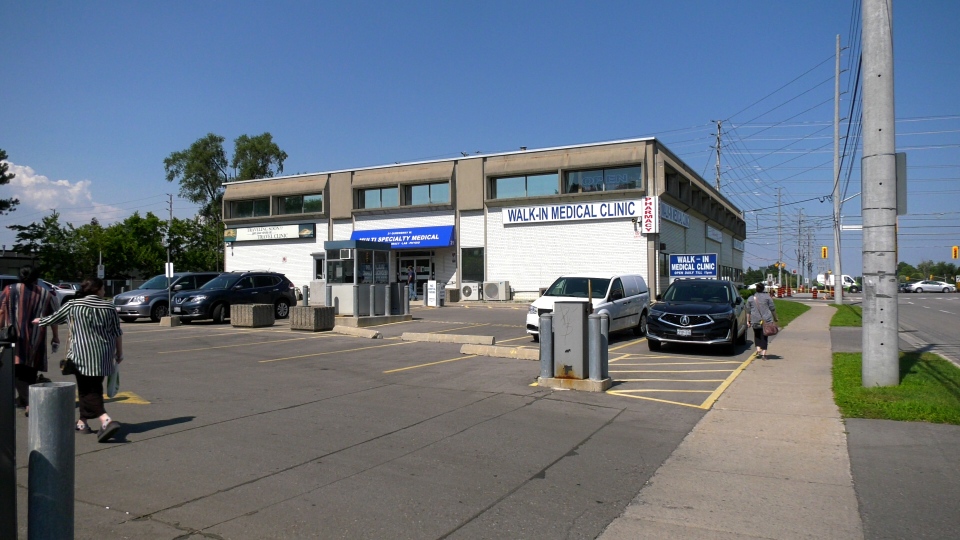 Having patients wait outside is recommended by health officials during the pandemic because the chances of spreading COVID-19 is much lower.

When CTV News Toronto phoned the clinic for comment, and selected ‘land line’ on the touchtone menu, their system sent an automated text.

And when we arrived in person, we were handed a generic note that said in part, “The clinic is proud of the quality of the medical care provided at this clinic. No one in the clinic has any comments for the media.”

Vojeckis said he wants public health officials to update their guidance to include people who don't have easy access to technology.

"Something's got to be done, you know. People are falling through the cracks and it's pretty sad," he said.

Vojeckis was eventually diagnosed with an injured tendon by his family doctor.