Ontario man charged $1,000 by fire department after his truck goes up in flames

An Ontario man said he was shocked to get a bill from a collection agency for an SUV fire that happened eight months ago.

“It's like I’m living this nightmare of watching my truck burn all over again," Gary Follett, who used to live in Mississauga, told CTV News Toronto.

In a random act, a stranger set his 2014 Hyundai Santa Fe on fire at 3 a.m. It was completely engulfed in flames and destroyed.

“I looked out the window and I said ‘It’s my truck.’ My truck was on fire, so I scrambled and ran downstairs and when I got there, there were firetrucks," said Follett.

Follett was renting an apartment in Mississauga when the fire happened in April 2021, but he has since moved to Cambridge, where he bought a home.

He just received a notice from a collection agency saying he owes the City of Mississauga $1,026 and he said he is not sure why. 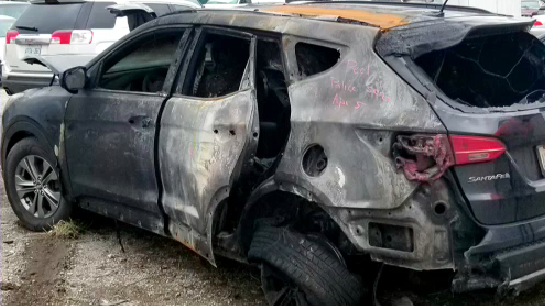 “I opened it and there was a bill for over $1,000. Five months living in Cambridge and I get a bill from the city of Mississauga for something that happened eight months ago," said Follett.

Follett said he has been trying to get someone to explain to him why he got the bill.

“Collections is trying to tell me to go to Mississauga. The city of Mississauga is telling me to go to collections, so no one is answering any of the questions that I have," said Follett.

CTV News Toronto reached out to the city of Mississauga and we were told the thousand dollar charge is the cost of a special foam that was used to put out the fire.

“We reviewed the case of Gary Follett and the truck fire he experienced,” a spokesperson said. “In this case, when our firefighters arrived on the scene, there was evidence of an accelerant having been used. Accelerants require a fire suppression foam additive which can extinguish both class A (regular combustibles) and B (flammable liquid) fires.”

“As there was evidence of an incendiary device and accelerant present, the scene was transferred to Peel Regional Police for further investigation as a suspected arson.”

“The invoice was issued due to the use of Fire Suppression Foam. Fees and charges are a standard billing practice in accordance with the bylaw, and commonly used by municipalities to help manage the high cost of materials in emergency situations. This cost can be recouped by insurance coverage where applicable.”

Follett said he thought his taxes covered the cost of fire services and he isn't happy that he has to pay the bill.

“A thousand dollar bill is something I don't need right now or at any other time," said Follett.

The city said extra charges to put out fires can sometimes be recouped by your insurance company, but Follett said his claim was closed months ago.

Still he's going to try because he feels it's a charge he shouldn't have to pay.