TORONTO -- The Ontario government has issued another province-wide emergency alert after public health officials confirmed 27 more deaths related to COVID-19 and 375 new cases of the virus on Saturday. 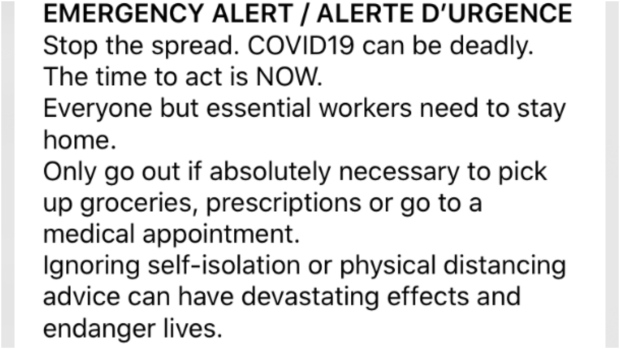 "Stop the spread. COVID-19 can be deadly. The time to act is now. Everyone, but essential workers, need to stay home," the mesage, which was issued just after 2 p.m., reads in part.

The first emergency alert issued by the provincial government came on March 27 and informed travellers returning to Ontario that they were required by law to self-isolate for 14 days.

"If it takes standing here every single day, if it takes mass messages to every single person in Ontario to save even one life, I’m prepared to do that," Ontario Premier Doug Ford said at a news conference on Saturday afternoon.

There are currently 3,630 confirmed cases in Ontario, including 1,219 patients who have recovered, up 196 from the 1,023 recovered patients reported on Friday.

According to the province, at least 71,338 residents have been tested for the virus so far, while 1,336 others are currently under investigation.

“In the last 24 hours we’ve processed over 5000 [tests]. Our capacity at this point actually is about 9, 400,” Ontario’s Associate Medical Officer of Health Dr. Barbara Yaffe said at a news conference Saturday afternoon.

A total of 94 Ontario residents have died as a result of COVID-19 since the outbreak began in late January, 54 of which are linked to 36 separate outbreaks at long-term care and nursing homes across the province.

Of the 3,630 confirmed cases, the province says that 506 patients have been hospitalized. Of those, 196 patients received treatment in an intensive care unit, 152 of which required a ventilator.

The news comes a day after the president and CEO of Public Health Ontario Dr. Peter Donnelly projected that as many as 15,000 people in the province could die from COVID-19 with health measures that are already in place.

Donnelly also commented on the recent discrepancies between figures reported by public health Ontario and the province's 34 public health units, saying that he understood that the difference in numbers is "frustrating."

On Wednesday, the number of COVID-19 deaths confirmed by local public health units was nearly double what the province was reporting.

However, Donnelly highlighted that the "correct" way to track the spread of the virus over time is through the province's integrated Public Health System (iPHIS),

Premier doubles down on criticism of U.S. President over N95 masks

Premier Ford reiterated his disappointment in U.S. President Donald Trump over his decision to stop the export of 3M's N95 face masks to Canada.

“I’m just so, so disappointed right now. As I said yesterday we will never rely on any other country moving forward,” Ford said. “When the cards are down you see who your friends are.”

On Friday, 3M said that the President had asked it to stop exporting the medical-grade masks to Canada and Latin America, a move that the Minnesota-based company said could have "significant humanitarian implications."

The N95 masks are particularly valuable to frontline healthcare workers as they provide more protection against the new coronavirus than ordinary surgical masks.

Ford said that he has been in constant contact with 3M Canada President Penny about securing the masks, but added that the company's "hands are tied."

Ford said that in the meantime, he will rely on Ontario’s manufacturing capabilities to produce masks as well as other equipment needed by frontline healthcare workers and other essential services.

"When the cards are down you see who your friends are, and I think it’s very clear over the last couple days who our friends are."

Trudeau says he is not looking at counter-measures against this move by the U.S., but rather he believes the countries can come to a diplomatic solution.