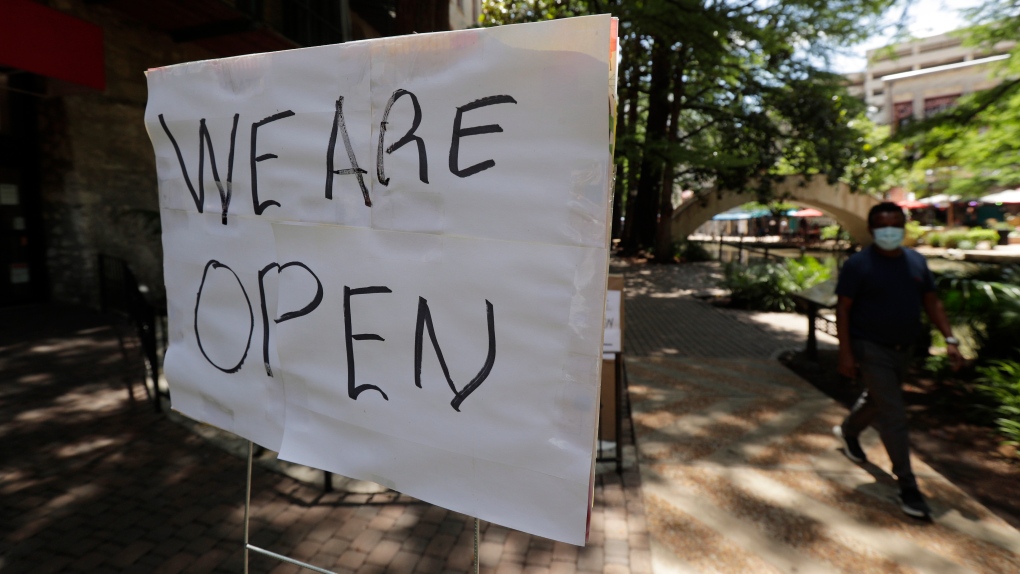 A man wearing a face mask for protection against COVID-19 passes a business that has reopened on the River Walk in San Antonio, Thursday, May 14, 2020. Texas attorney general Ken Paxton has warned officials in San Antonio, Austin and Dallas that the cities could face lawsuits if they do not relax coronavirus measures he says go further than state law allows. (AP Photo/Eric Gay)

TORONTO -- The Ontario government is hiring an additional 100 occupational health and safety inspectors, who are expected to be fully trained and deployed by July.

In a news release issued on Wednesday afternoon, the Ontario government said that officials have conducted more than 13,300 COVID-19 related workplace inspections and investigations across the province so far this year.

As a result of the inspections, 9,480 orders and 373 tickets were issued. Unsafe work was stopped 15 times, the government added.

In an effort to conduct more inspection blitzes, the province announced Wednesday that they will hire more than 100 new occupational health and safety inspectors. The new inspectors are scheduled to be fully trained and deployed by July 1.

“As the province continues to reopen, we need businesses of all sizes to do better as there are no shortcuts to safety," Monte McNaughton, Minister of Labour, Training and Skills Development, said in a statement. "With a new total of more than 500 inspectors, our government is building the largest team of inspectors in Ontario's history to educate business owners, enforce public health measures and keep workplaces safe now, and for many years to come."

Most of Ontario has already transitioned from a stay-at-home order, which shuttered most restaurants and non-essential businesses, into the province’s colour-coded tiered framework.

As of Wednesday, only two regions have been placed into the strictest grey tier. Under this category, most businesses are allowed to reopen with low capacity limits while restaurants and gyms remain closed.

The majority of other regions in Ontario have been placed in the four other tiers, allowing restaurants to begin offering in-person dining, gyms to open and larger capacity limits in stores.

The province has been conducting regional inspection blitzes for months in order to educate businesses on COVID-19 protocols and to ensure compliance.

The government says that over the past week, 110 provincial offence officers in Eastern Ontario, Durham Region and Wellington-Dufferin-Guelph took part in an education campaign to inform small businesses of the new rules.

Inspectors visited 1,081 workplaces, the government said, with most employing fewer than 25 people. The government says these businesses will be visited again for “more enforcement-oriented inspections.”