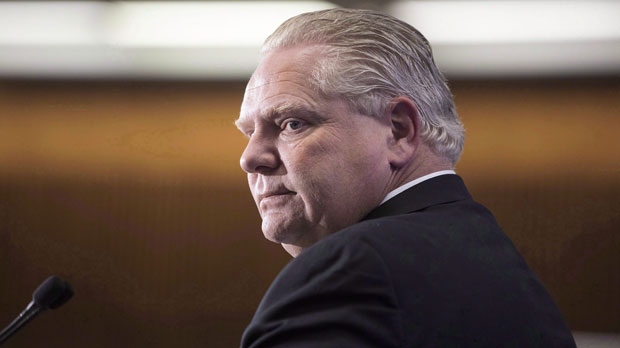 Ontario PC Leader Doug Ford takes questions from journalists during a pre-budget lock-up as the Ontario Provincial Government prepares to deliver its 2018 Budget at the Queens Park Legislature in Toronto on Wednesday, March 28, 2018.(THE CANADIAN PRESS/Chris Young)

KITCHENER, Ont. -- Doug Ford is promising to cut hydro bills by 12 per cent if he wins Ontario's spring election, saying it would be on top of a rate reduction from the governing Liberals, whose plan he has repeatedly criticized.

The Progressive Conservative leader said Thursday that he would cut rates through a variety of measures that would save the average ratepayer $173 a year.

"I think that's a pretty good start," he said. "Putting $173 back in the taxpayer pocket."

The Tory plan would see the government give ratepayers the dividends it gets from its share of the partially privatized Hydro One.

It would also shift the cost of energy conservation programs from hydro customers to the tax base. And Ford said he would place a moratorium on new energy contracts and renegotiate existing deals where possible.

The plan comes as Ford continues to bemoan the fact that the governing Liberals will borrow billions to lower hydro rates by 25 per cent in the short-term. But he said their plan will remain in place, at least initially, if he's elected this spring.

"We're going to be reviewing that," Ford said of the Liberals' Fair Hydro Plan. "That was, as far as I'm concerned, the wrong thing to do, borrowing down the future and the only people who are going to pay for it is our children, our great-grandchildren."

The plan lowers time-of-use rates by removing from bills a portion of the global adjustment -- a charge consumers pay for above-market rates to power producers -- for the next 10 years.

In the meantime, producers will continue being paid the same, so Ontario Power Generation has been tapped to oversee the debt used to pay that difference through a new entity called OPG Trust.

That financing structure will cost an extra $4 billion, according to both the province's auditor and the financial accountability officer. The Liberals have said the financing will cost closer to $2 billion.

Ford said Wynne "hoodwinked" taxpayers by creating the Fair Hydro Plan, but said he'd maintain it, with his own proposed 12 per cent rate cut being over and above the Liberal reduction.

Tory energy critic Todd Smith said the party may have a difficult task ahead if it wants to alter the Fair Hydro Plan because of the complexity of the borrowing vehicle created to finance the reduction.

"This was a very convoluted, confusing plan that the Liberals put in place," he said. "They concocted this for one reason and that was to hid it from the province's books, to make it seem like they had more money than they actually have."

Earlier this week Auditor General Bonnie Lysyk said the government's deficit projections over the next three years were understated by billions, in part, because of the Fair Hydro Plan and financing that is not included on the province's financial statements.

"This was done to hid the actual cost of their program for a very, very short period of time," Smith said. "It hasn't done anything to reduce the generation costs of electricity. What we're proposing here today will do that."

Colin Nekolaichuk, spokesman for Energy Minister Glenn Thibeault, said that after months of denouncing the government's efforts, Ford has admitted he will "embrace" the Liberal hydro plan as the foundation of the Tory proposal.

"Ford will retain all aspects of the Fair Hydro Plan," he said in a statement. "Unfortunately, it's everything else that Doug Ford has proposed that fails to pass the smell test."

Nekolaichuk said Ford's promise to stop new electricity procurement has already been done by the government, which means the forecasted savings in the Tory plan from that pledge aren't real. And Ford's rhetoric about existing deals sends a bad signal, he added.

"By bragging loud and large that he'll tear up committed capacity contracts, he is inviting massive law suits that will surely be won, costing the provinces hundreds of millions of dollars that, in turn, will drive electricity bills back up," Nekolaichuk said.

"Mr. Ford has endorsed the Liberals' disastrous hydro borrowing scheme, which will cause bills to skyrocket by 70 per cent right after the election and add $40 billion of debt for future generations to pay off," she said. "This after repeatedly criticizing the Liberal scheme and the high executive salaries that come along with it."

Ontario heads to the polls June 7.