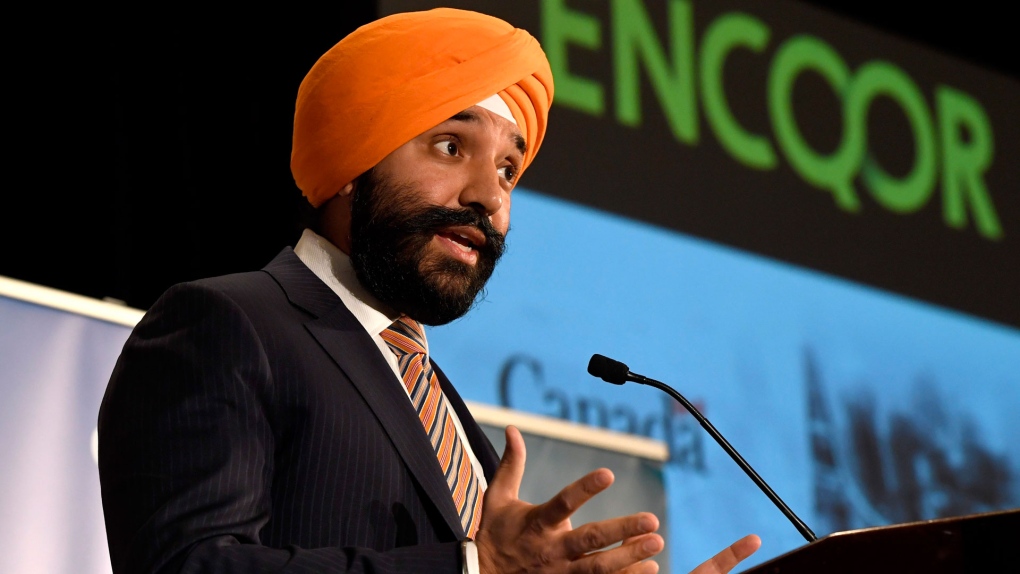 Minister of Innovation, Science and Economic Development Navdeep Bains speaks during an announcement on investments in 5G technology by the Ontario, Quebec and federal governments, in Ottawa on Monday, March 19, 2018. THE CANADIAN PRESS/Justin Tang

OTTAWA -- The governments of Canada, Ontario and Quebec are partnering with some of the world's digital heavyweights to usher in the next generation of wireless technology.

A $400-million public-private investment will create a corridor of 5G wireless test beds through Canada's two largest provinces, aimed at giving companies a chance to experiment with new ideas and products that are only now becoming possible thanks to recent breakthroughs in telecommunication technology.

Speaking at a funding announcement Monday in Ottawa, Innovation Minister Navdeep Bains gushed over the range of applications for the new technology, from smart cars that reduce accidents and traffic congestion to refrigerators that monitor food levels and automatically order fresh groceries.

"5G is the gateway to the future and we are just on the brink of this technological revolution," Bains said.

The project is called ENCQOR -- Evolution of Networked Services through a Corridor in Quebec and Ontario for Research and Innovation -- and will allow an estimated 1,000 small and medium-sized businesses to plug into a 5G platform and access related research and technology.

Mobile 5G -- or fifth-generation -- wireless technology is up to 100 times faster than the 4G system.

The opportunity to experiment will help businesses come out on top in what Bains described as a global innovation race.

Ontario, Quebec and the federal government have each pledged about $67 million, while the remaining $200 million will come from five private-sector partners.

Ericsson, Ciena Canada, Thales Canada, IBM Canada and CGI will lead the public-private partnership, which is expected to "secure" more than 4,000 jobs, 1,800 of which will be specialized in 5G.

Karl Sasseville, a spokesman for Bains, clarified that those jobs are made up of existing positions with the five private-sector partners that will be repurposed for the 5G project.

Borje Ekholm, CEO of Ericsson, said Canada is "leapfrogging" to the front of 5G technology with it commitment to wireless innovation.

Often, when people think of national infrastructure they think of roads and streets, Ekholm said.

"We believe the future highways will all be digital."

Ekholm said he expects the test-bed technology to be deployed later this year and become operational by early 2019.

The government estimates information and communications technology contributed $76 billion to the country's gross domestic product in 2017.