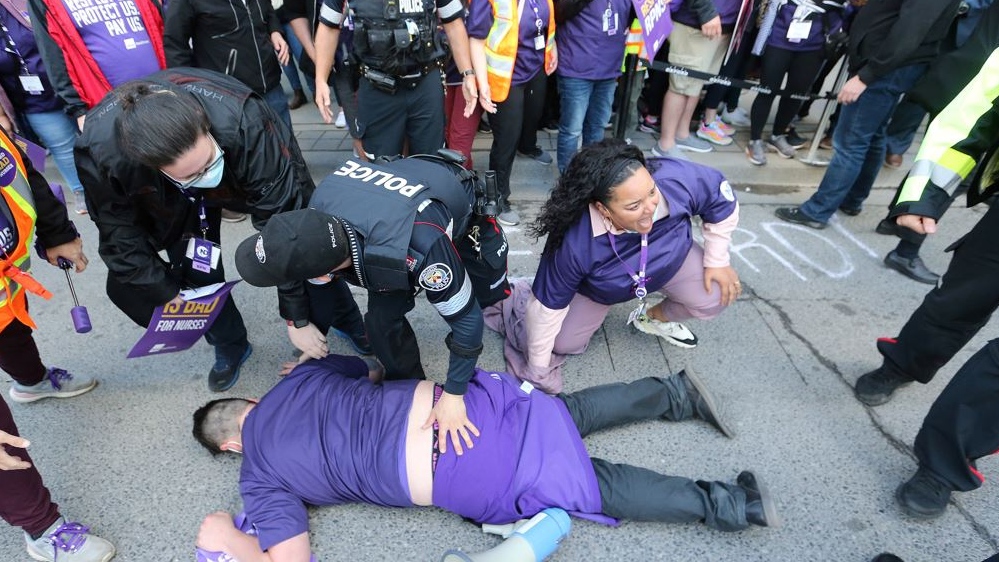 Two nurses protesting wage restraint by the Ford government were injured outside the provincial leaders’ debate in Toronto on Monday evening, their union says, as Progressive Conservative Leader Doug Ford’s bus arrived at the site and he prepared to disembark.

Up to 200 registered practical nurses who are members of Service Employees International Union (SEIU) Healthcare gathered outside the TVO building in North York on Monday to protest a Ford government law that caps their annual salary increases below the rate of inflation.

“The peaceful demonstration of nurses was met with force as police cleared a path for Doug Ford before he exited his campaign bus,” SEIU Healthcare spokesperson Angelica Cruz told CP24. “It is unacceptable that injuries were sustained after one nurse hit the pavement, while another nurse was injured after being dragged across the asphalt.”

Video and images posted to social media from the scene show a man wearing a purple SEIU healthcare t-shirt appear to be pushed by a man wearing a blue suit and an earpiece.

The man is then seen face down on the roadway, writhing in pain. Another woman in a purple shirt was seen on the ground and appeared to be pulled and prodded several times before she could get up.

The man on the ground was later loaded into an ambulance and taken to hospital for treatment of injuries that reportedly included a concussion.

In a statement provided to CP24 on Wednesday, Ontario Provincial Police spokesperson Bill Dickson said that members of the OPP’s Protective Services Section were at the debate providing security to the three major party leaders.

Dickson said that “individuals were attempting to block the access to the facility where the debate was being held” when police decided to intervene.

He said that no charges have been laid in relation to the event.

“For the safety of all present, individuals were moved aside, during which time one fell to the ground. The individual was taken to hospital for assessment and was later released,” he said. “While the OPP respects the rights of everyone to freedom of expression and peaceful assembly, disruptive behaviour can pose safety concerns. At any time, when an individual’s behaviour reaches a threshold where it becomes unsafe, police are required to intervene to restore public safety. Only the level of intervention necessary to maintain peace, order and security is used.” 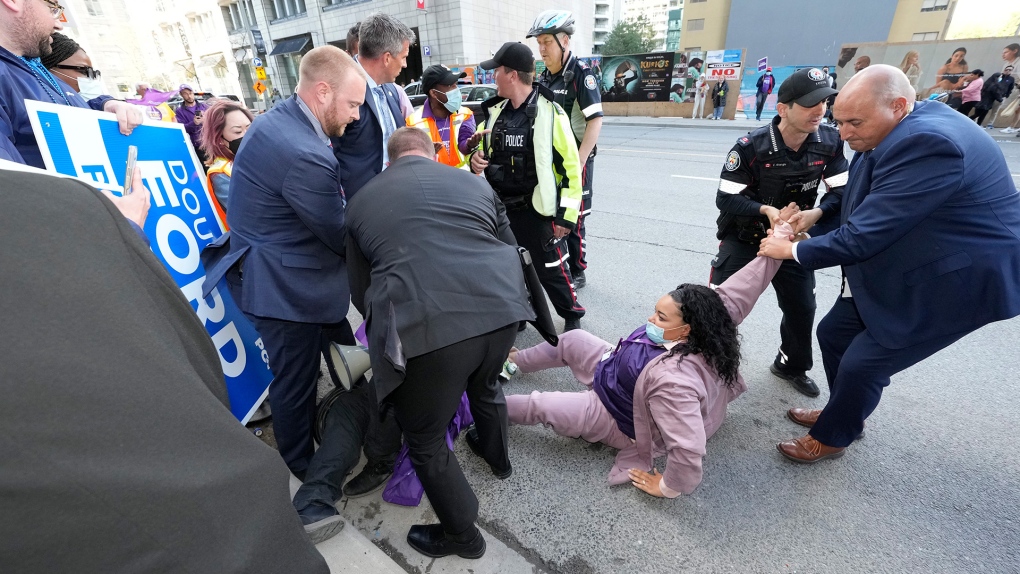 A spokesperson for Ford reached by CTV News Toronto on Wednesday referred all inquiries to Toronto police and the OPP, noting that they “don’t comment on police operations.”

Meanwhile, asked specifically what injuries were sustained by both SEIU members seen on the ground in the video, the union declined to comment.

“Our statement is the only information we will be providing at this time,” Cruz told CP24. “We will not comment further until we explore all options with legal counsel.”

For its part, Toronto police said its officers “did not forcibly move anyone from a location” at the scene, nor did they make any arrests. 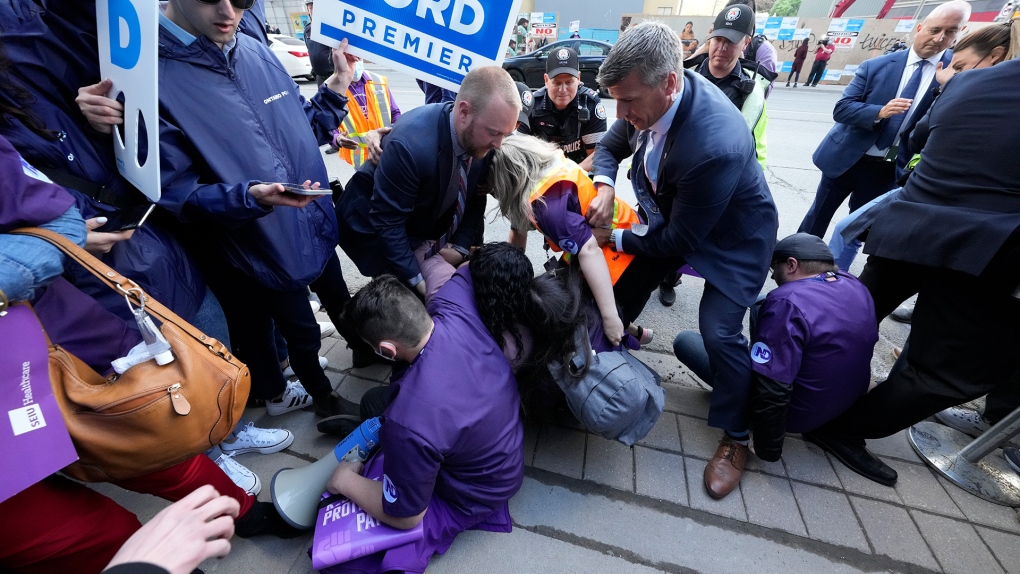 “No complaints have been made to TPS,” Toronto police spokesperson Connie Osbourne said. “You’d have to speak to OPP (regarding) Doug Ford’s protection officers and what they dealt with and why.”

The nursing sector in general is upset over the Ford government’s Bill 124, limiting wage increases in most sectors to one per cent per year when inflation is now approaching seven per cent.

Nurses and several other associated groups of healthcare workers were allocated $5,000 retention payments earlier this year.

Jailed American basketball star Brittney Griner returns to a Russian court Thursday amid a growing chorus of calls for Washington to do more to secure her release nearly five months after she was arrested on drug charges.