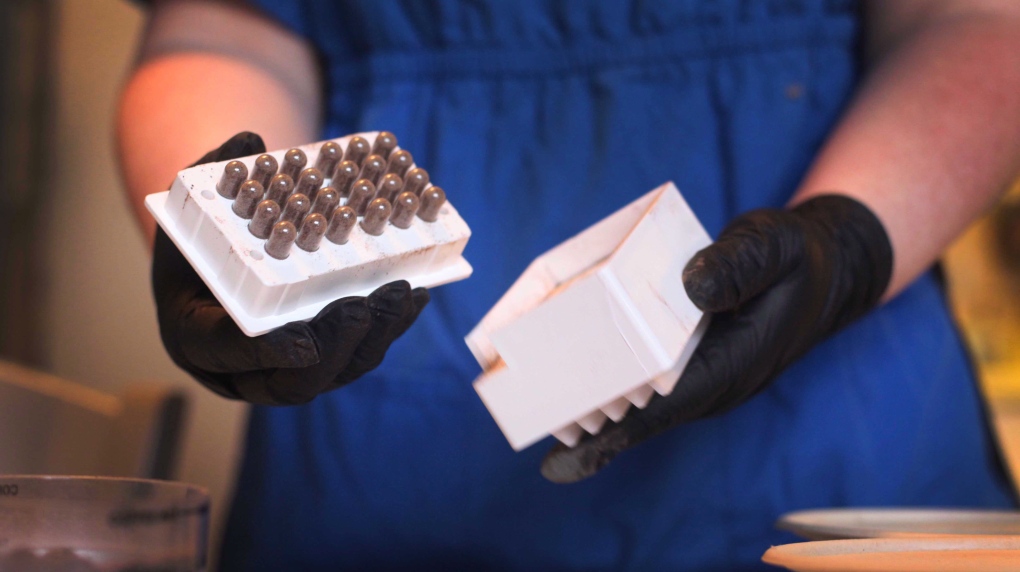 A placenta is encapsulated for remedial purposes in Columbia, Mo., on March 1, 2012. Health Canada is cautioning mothers and others who may be consuming human placenta preparations about potential risks for themselves and their babies. The federal department says consuming human placenta could lead to bacterial or viral infections in mothers or their babies. The risk is higher if someone ingests the placenta of another person. THE CANADIAN PRESS/AP, Missourian, Megan May

TORONTO -- Kim Kardashian has done it. So have moms Alicia Silverstone and Hilary Duff.

The practice of consuming one's placenta to achieve purported health benefits after giving birth is a headline-grabbing phenomenon -- and not just among celebrities.

But on Tuesday, Health Canada cautioned against doing so, saying there is no scientific evidence to support such medical claims and warning that it could lead to bacterial or viral infections in mothers or their babies.

The risk is higher if someone consumes placenta from another person.

"When you deliver a baby, there is a lot of bacteria in your vagina and cross-contamination with other things, like feces," said Dr. Amanda Selk, an obstetrician-gynecologist at Women's College Hospital in Toronto, commenting on Health Canada's warning. "It's all close together, especially with a vaginal delivery."

Selk said there is no scientifically proven means to prepare placenta -- whether by cooking, steaming, dehydrating or encapsulating -- that guarantees any bacteria or viruses present are destroyed.

"And some people actually eat it fresh," she said.

Health Canada cited a case reported by the U.S. Centers for Disease Control about an infant who was hospitalized for an infection from a bacteria found in the placenta pills his mother had been ingesting.

The federal department also said placenta products prepared by a third party are considered drugs and are subject to the requirements of the Food and Drugs Act. No such products containing human placenta are authorized for consumption in Canada.

Meaghan Grant, co-owner of Toronto Family Doulas, said her company has been providing placenta capsules to new mothers since June 2016 at a cost of $325.

A trained and certified doula spends two days in a client's home preparing the placenta, which is steamed, dehydrated for 12 to 24 hours, then encapsulated.

The company also operates in Hamilton and Ottawa, but provides placenta encapsulation only in the former location.

Health Canada said it has sent several compliance letters to clinics and individuals offering human placenta encapsulation services to clarify regulatory requirements, and the department said it will take regulatory action if any health risk is identified.

But Grant said her company doesn't run afoul of Canada's Food and Drugs Act because it doesn't prepare and sell placentas from one individual for use by another.

"We're not selling a product, we're selling a service," she said, adding that she would like to see services like hers regulated to weed out "people who teach themselves how to do it using an oven and a cookie sheet on YouTube."

As well, Grant said the company makes no claims about potential health benefits.

"As doulas, our job is to support a family in supporting the choices that are right for their family. We approach this as: 'Our clients want this service."'

Still, Selk advises against women consuming placenta products, not only because of the risk of infection, but also because there is no scientific evidence that it has any health benefits.

"But people trust their friends and personal experience," she said. "So when someone says 'I ate it and I felt better,' a lot of people trust that information and they don't see any risk to it or minimal risk to it.

"We have things that we know work for (anemia and postpartum depression) and until we have a way to say that this is actually a safe process, we wouldn't recommend it."