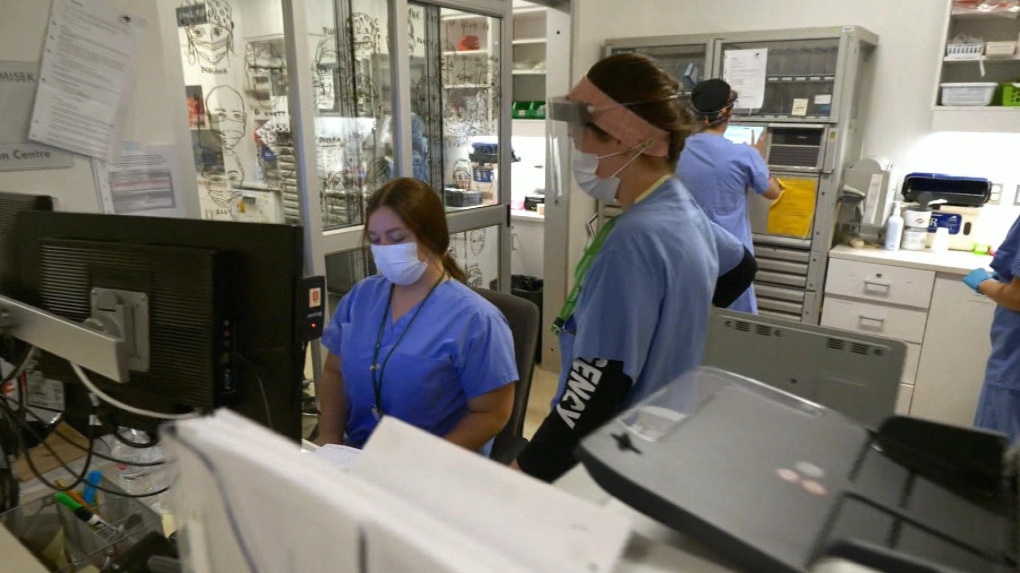 TORONTO -- The Ford government won’t make any decision on whether to mandate vaccines for health-care workers this week, despite an earlier suggestion from Health Minister Christine Elliott promising clarity on the issue.

Health Minister Christine Elliott told reporters on Monday afternoon that a decision on whether to require that all health-care workers be fully vaccinated would “probably” be coming before the end of the week.

However, about an hour later a spokesperson for Elliot confirmed to CP24 that “a decision will not be coming this week” without providing any further timeline.

The about-face comes as Liberal Leader Steven Del Duca accuses the Ford government of dragging its feet on mandatory vaccines for health-care workers.

“Here we are just a few days away from November and there's still this back and forth, this sort of dithering dance that the government's doing and I don’t think it makes a lot of sense. We should have seen more decisive action taken on this quite some time ago.”

Premier Doug Ford reached out to hospital administrators and other stakeholders back on Oct. 15 to solicit their input on the idea of mandating vaccination for health-care workers and had given them until Oct. 19 to respond.

Since then a number of groups have come out in favour of a vaccine mandates for health-care workers, including the Ontario Hospital Association and the Ontario Science Advisory Table.

Ford, however, has continued to express concern about potential staffing impacts at hospitals.

Speaking with reporters at Queen’s Park on Monday, Elliott said that her government is still reviewing the responses to Ford’s letter but is concerned that mandating vaccines for health-care workers could have a disproportionate impact on resources at hospitals in some more rural areas of the province, particularly in Northern Ontario.

“I can't say whether it's the majority or not but I can tell you that we have received some responses that don't want mandatory vaccinations and others do. So it's something that we have to look at from a province-wide basis to make a decision that's going to be in the best interest of the health and well being of all Ontarians,” she said.

Some hospitals have implemented stronger policies

The Ontario government currently allows unvaccinated health-care workers to continue to attend work so long as they participate in a rapid testing program.

Last week The Hospital for Sick Children announced that it was putting 147 employees on unpaid leave for not complying with their vaccine mandate. The University Health Network also indicated that it planned to terminate about one per cent of its workforce for failing to comply with a similar policy.

“I’m not decided. I want to listen to what the experts have to say. I think that's really important,” Elliott insisted on Monday. “We want to hear from the hospitals and the experts, the epidemiologists, about what they have to say. This has got to be a science-based decision and based on the facts as we know them in different parts of Ontario.”

The Ontario Hospital Association has been calling for a vaccine mandate for all healthcare workers since July.

But Ford has expressed concern about implementing a policy here and has claimed that doing so could result in the termination of “tens of thousands” of workers.

He has also cited the experience of Quebec, which has had to push back a deadline for its healthcare workers to be fully vaccinated amid concerns that it would have to suspend more than 22,000 people.

The Ford government mandated vaccination for long-term care workers earlier this month amid data suggesting a number of homes had vaccination rates lower than 70 per cent.