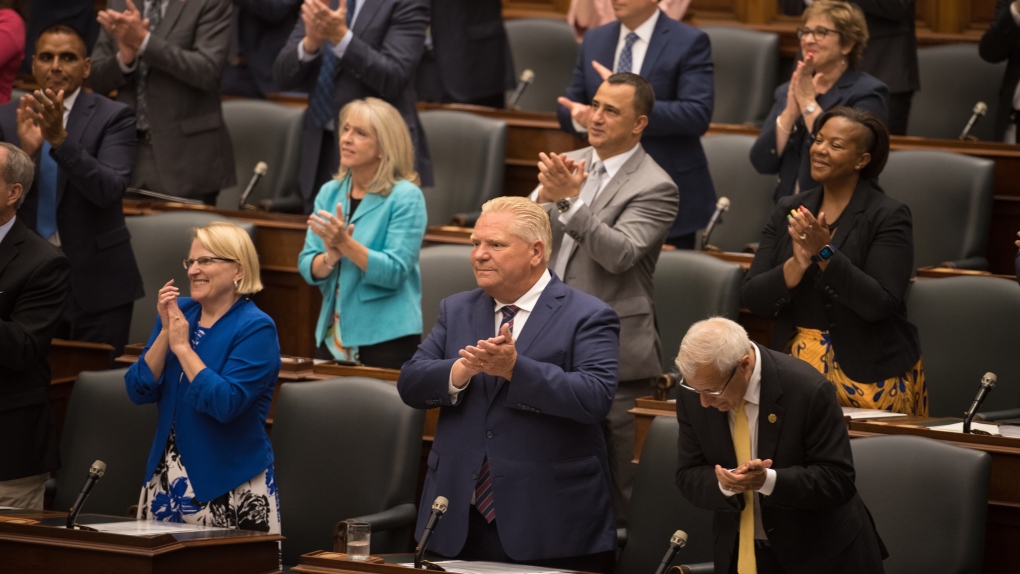 Ontario Premier Doug Ford claps during Ted Arnott's acceptance speech for his re-election to the position of Speaker of the Ontario Legislative Assembly at Queen's Park, in Toronto on Monday, August 8, 2022. THE CANADIAN PRESS/Tijana Martin

The tax credits include an extended credit for low-to mid-income earners, a credit for seniors to make their homes safer, and a subsidy for child-care costs for parents with children.

In order for the tax credits to be guaranteed, MPPs still need to vote on the budget before it is passed.

The first tax credit, the low-income individuals and families’ tax credit, also known as LIFT, existed since 2018, but the program was only available for people earning up to $38,500 annually.

The proposed budget has promised to expand the program so that people in the province making upwards of $50,000 per year or households making $82,500 per year could have access to the credit.

The expansion would mean more than 1.7 million Ontarians could be eligible for an average tax credit of $300. At the maximum, lower-income earners can receive up to $875 in tax relief.

The credit can be claimed each year while filing one’s personal tax return.

The second proposed tax credit is the Ontario Seniors Care at Home Tax Credit to help support lower-income seniors age 70 and above.

Lower-income seniors in that age category can receive up to $1,500 for hospital-style medical equipment and support. It offers a 25 per cent tax break on a senior’s at-home medical costs up to $6,000.

Under the terms of the new credit, they can claim expenses associated with home nurse visits, a hospital bed at home, wheelchairs, attendants, canes, oxygen, eyeglasses or hearing aids.

The credit is refundable and anyone earning up to $65,000 can qualify, and the amount of credit on offer is on a sliding scale based on income level.

The third tax credit being proposed is called the Childcare Access and Relief from Expenses (CARE). The province has previously said the credit will be offered to families with a household income of $150,000 or less.

Eligible families may be able to claim up to 75 per cent of some child-care expenses, including services from camps and child-care centres.

The province has previously said the new tax credit will provide an average of about $1,250 per family in new childcare support to nearly 300,000 families.

The credit can also be claimed each year while filing one’s personal tax return.

Canada's new special representative on combating Islamophobia says she is sorry that her words have hurt Quebecers.

Amid new standards, do you have a loved one in long-term care? Share your story

New guidelines on long-term care services by the Health Standards Organization say residents should receive at least four hours of direct care each day. If you or a loved one are living in long-term care, we want to hear from you.