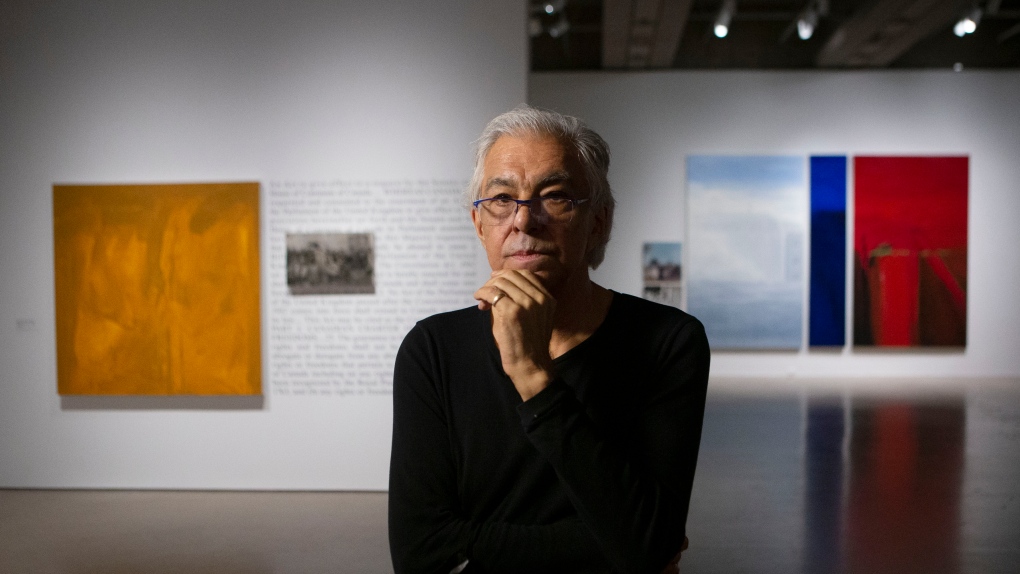 Artist Robert Houle is photographed amongst his paintings at his exhibition 'Robert Houle: Red is Beautiful' at the Art Gallery of Ontario, in Toronto, on Thursday, December 2, 2021.The exhibition, which features 100 paintings and installation and residential school to museum boardrooms, covers more then 50 years of artmaking and advocacy, and will tour across Canada (Calgary and Winnipeg) and then to the National Museum of American Indian in NYC in 2023.THE CANADIAN PRESS/Chris Young

The half-century long career of renowned Saulteaux and Anishinaabe artist Robert Houle is the focus of a new major retrospective at the Art Gallery of Ontario titled "Red is Beautiful."

The exhibition, named after one of Houle's earliest pieces, features more than 100 works including monumental paintings, intimate drawings and large-scale installations as well as personal and archival photos.

Putting together the show has been two years in the making but a dream of Houle's for longer. The artist, who is 74, wanted to do a retrospective before he turns 75 next year. His work has been part of two other major shows but this is the largest exhibit to date.

"It's kind of frightening. Makes me realize how old I am," Houle said with a chuckle during a phone call.

"You still get (goosebumps) and anxiety no matter how many professionals are helping you put up your paintings, your installations, your objects. It's still very nerve-racking."

The retrospective opened Friday in Toronto.

Houle is often regarded as one of the most influential First Nations artists since breaking into the contemporary art scene in 1970. The Art Gallery of Ontario's website describes his work as blending abstraction, modernism and conceptualism with First Nations esthetics and histories. His work explores themes of Indigenous sovereignty, Indigenous spiritual traditions, major resistance movements and the residential school era.

Houle grew up in Sandy Bay Ojibway First Nation in southern Manitoba. As a young boy, he was forced to attend a residential school in the community, and as a teen was sent to another residential school in Winnipeg. Like many other Indigenous boys and girls, Houle says he was stripped of his language and culture and faced abuse while attending the institutions.

Later in life, Houle began to use art as a way to heal the wounds of the past.

Prompted, in part, by nightmares of his time in residential school, Houle spent 50 consecutive days illustrating his dreams. These drawings would eventually make up his Sandy Bay Residential School Series.

"It took me awhile to recover or to actually face and acknowledge what I had experienced. The abuse, the humiliation, being punished for speaking Saulteaux and other things," said Houle.

"(Art) gave me the incentive. It gave me the courage, and I knew if I made something visual that was painful that it was a form of release."

Houle pays tribute to the Oka Crisis in an oil panting called "The Pines." Three panels depict a scene from a forested area, which was the subject of a land dispute between the Mohawk and the town of Oka.

The standoff between Mohawk protesters, Quebec police, the RCMP and the Canadian Army ran for 78 days. The crisis took place in Kanehsata:ke near the town of Oka. The town wanted to expand a golf course onto land sacred to the Mohawk community.

Houle studied at McGill University in Montreal and spent a lot of time in the nearby Mohawk communities of Kanehsata:ke and Kahnawa:ke.

"It gave me a lot of courage politically. Not to be shy about protests. Not shy about analyzing what was going on there and in the rest of our country," said Houle.

Wanda Nanibush, curator of Indigenous art at the gallery, first became aware of Houle's work in what she describes as a "life-changing" moment as a 16-year-old in 1992.

She visited a Houle-curated exhibit called Land, Spirit, Power at the National Gallery of Canada.

"It was the first time I had seen art by our own people that was contemporary.... I just felt like he presented a totally different idea of who we were," remembers Nanibush.

"It showed me a totally different way to be an activist in the arts and think about social justice from a very different point of view."

Nanibush had to reach out to more than 30 lenders to have them agree to loan out Houle's work for the exhibit.

She says thankfully none of them said no, "they want Robert to have the recognition he deserves."

The exhibit runs until April 17, 2022, and will then tour Calgary and Winnipeg.

This report by The Canadian Press was first published Dec. 3, 2021