TORONTO -- Residents in a Toronto neighbourhood say a vacant home has turned into a dumping ground where people load off piles of dirt and debris.

Gail Cole, who has lived in her family home on Fifeshire Road in North York for 40 years, said she’s grown increasingly frustrated at the piles of dirt and debris left on the vacant property next door over the past few months.

Cole said the home has been vacant for at least five years, and in spring, she had to call the city because the grass was getting too long.

But things took a turn for the worst this past fall, she said.

“We noticed a big mound of dirt and then the next day there was two more, and then within three days there were tons of mounds of dirt, and all this debris,” she said.

On Sunday, several large piles of dirt and debris sat on the property located at 60 Fifeshire Road On the front door, there were two notices warning the homeowner to clean up the property.

The “emergency order to comply” posted under the Toronto Municipal Code stated that the property must be cleaned up or secured by Dec. 2, 2019.

Cole said she can’t understand why, weeks later, nothing has been done.

“If they told the homeowners that they have to comply and clean it up by Dec. 2, I don’t know why it’s Dec. 29 and it’s still a mess,” she said.

Cole said that one day when she heard a dump truck outside and she ran out with the camera on her phone ready. 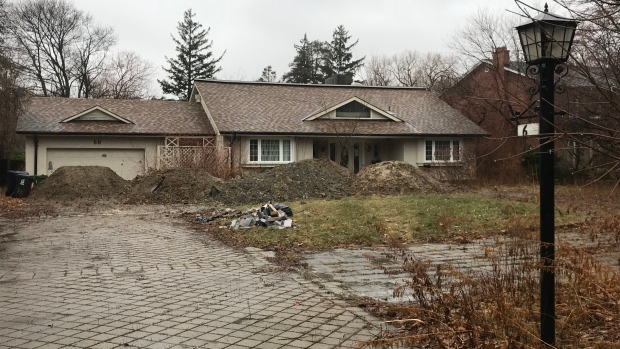 “There was a dump truck dumping. I didn’t see it actually dumping, because it was just driving away. There was another dump truck around the corner waiting to come in and dump,” she said.

“I actually took a picture of the dump truck [and] when they saw me, they drove out really quickly [and] almost crashed into another car.”

She said nothing has been dumped on the property since then, but can’t understand how the homeowner has been able to get away with doing nothing for so long.

“People just buy property and they bank it, and they wait for the values to go up, and in the meantime, they don’t take care of it,” she said.

Cole said she really just wants to see the property cleaned, and doesn’t care who does it.

CTV News Toronto asked the City of Toronto for an explanation as to why, beyond the warning notices, nothing has been done, but the city did not respond Sunday.