Nearly 75 per cent of Torontonians plan on getting COVID-19 vaccine, survey finds 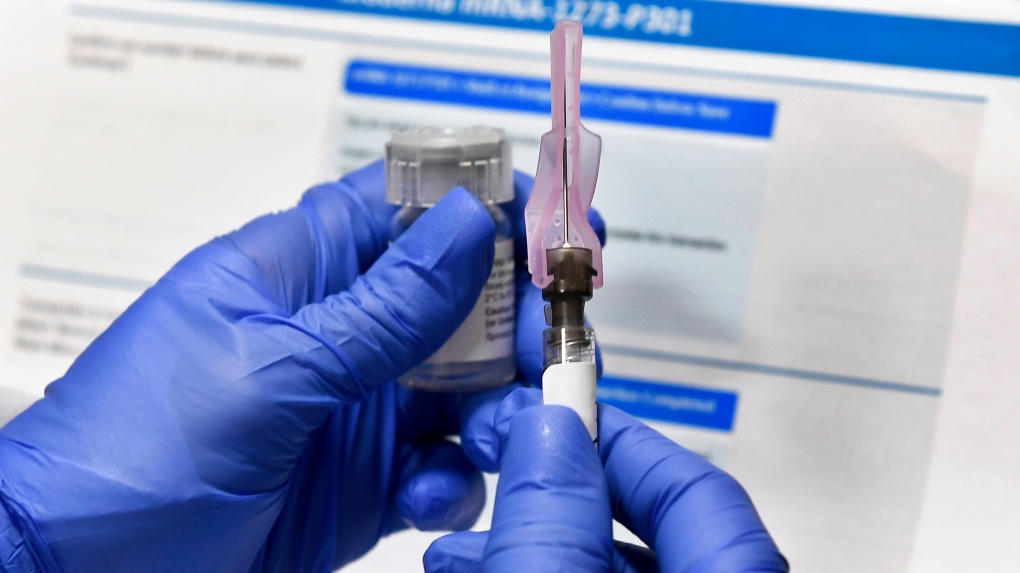 FILE - In this Monday, July 27, 2020 file photo, a nurse prepares a shot as a study of a possible COVID-19 vaccine, developed by the National Institutes of Health and Moderna Inc., gets underway in Binghamton, N.Y.

TORONTO -- Nearly 75 per cent of Torontonians say that they will get a COVID-19 vaccine once its available, surpassing the threshold that the World Health Organization has said is necessary to achieve herd immunity in a community.

According to an online survey of 1,201 residents that was conducted on behalf of Toronto Public Health by Ipsos Reid, about 73 per cent of respondents said that they would either definitely get a COVID-19 vaccine (40 per cent) or probably get it (33 per cent) once they become available.

The survey would seem to suggest that enough Torontonians do plan to get vaccinated to achieve widespread herd immunity, something the WHO says is possible once about 65 to 70 per cent of a population is protected.

Of course, it could be a while before the majority of Torontonians are able to get access to a vaccine.

The province has said that it expects to receive a combined 2.4 million doses of the Pfizer and Moderna vaccines in the first three months of 2021, which would only be enough to vaccinate 1.2 million Ontarians with healthcare workers and long-term care residents expected to be at the front of the line.

In a staff report that will be considered by the city’s board of health next week, Medical Officer of Health Dr. Eileen de Villa said that Toronto’s vaccine task force has been meeting since November and is “actively preparing for the logistics of receiving and distributing the vaccines for Toronto residents.”

As part of that work, she said that the task force is engaged with “the healthcare sector to make sure it is ready for vaccination” in early 2021. Toronto Public Health staff are also preparing a “community-centric vaccination campaign” that would focus on ensuring “that many diverse populations are properly aware of, and engaged in, the COVID-19 immunization planning,” De Villa said.

During next week’s meeting the board of health will vote on a motion which would ask the Ministry of Health for resources and funding to adequately prepare for Toronto's COVID-19 immunization plan, including support for required technology, staffing, and logistics.”

It will also consider another motion which would formally ask that the province consults TPH staff in creating its vaccine information system.

The survey released by Toronto Public Health on Monday morning was conducted in October before Toronto and Peel were placed in a lockdown.

Nonetheless, the majority of respondents did say that they were dealing with some level of anxiety and worry due to the pandemic.

The survey also suggested that lots of people are exercising and sleeping less and smoking cigarettes and using cannabis more since the start of the pandemic.

About 42 per cent of respondents said that they are exercising less since the pandemic began compared to 24 per cent who said that their physical activity levels have actually increased.

Alcohol consumption was largely unchanged with just as many people saying their use went up as those saying it went down but when it came to cannabis people were much more likely to say that their use of the drug has increased (35 per cent) than declined (15 per cent).

A similar trend was also observed when it came to tobacco products – 31 per cent said they are using tobacco more compared to 15 per cent who said less.

“Poor mental health is also likely being driven in part by the fact that many Torontonians are now getting less physical activity and sleeping less than before mid-March,” de Villa said in the staff report.

The survey is considered accurate to within 3.2 percentage points, 19 times out of 20.

Toronto public Health, however, says that the results may not be entirely representative of the population as a whole as it relied on volunteers.