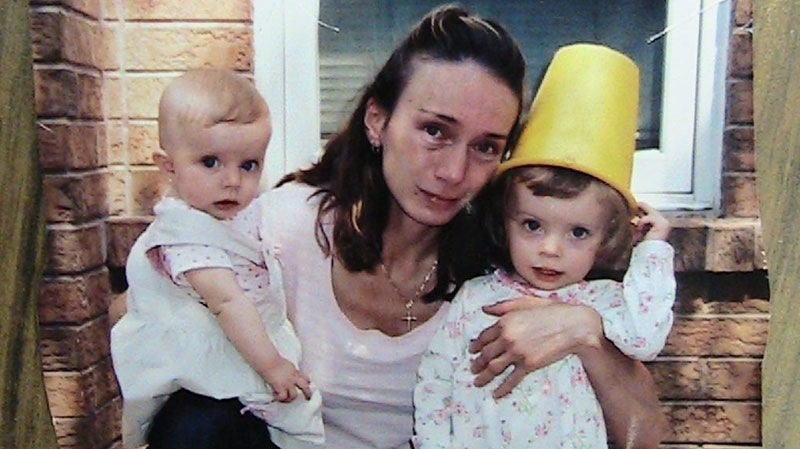 Elaine Campione is seen with her two daughters, left to right, Sophia, 19 months, and Serena, 3, in this undated photo handed out by the court in Barrie, Ont., on Thursday, November 4, 2010. (THE CANADIAN PRESS/HO)

BARRIE, Ont. - Mental illness did not prevent a mother who drowned her two young daughters from knowing it was wrong as she held their heads under water in the bathtub, court heard Friday.

Killing the girls and posing their little bodies in her bed holding hands, and wearing their Tinkerbell and princess pyjamas, was Elaine Campione's "grand gesture" for an abusive ex-husband who was fighting for custody, a jury heard.

Campione, 35, is charged with first-degree murder in the deaths of her two daughters -- Serena, 3, and Sophia, 19 months.

The defence concedes Campione drowned her children, but is urging the jury to find her not criminally responsible by reason of mental disorder.

Lawyer Mary Cremer, in her closing arguments this week, argued mental illness robbed Campione of her ability to make rational decisions, and took from her the only thing she was living for -- her children.

"At the beginning of this trial you no doubt asked yourselves: how, how does a mother kill her children?" Cremer told the jury Friday as Campione sat in the witness box whimpering.

"Elaine was sick. She was sick for a long time. She was not treated properly. She was left alone to fend for herself."

The Crown alleges Campione killed the girls and tried to kill herself just days before a family court date because she didn't want her abusive ex-husband to get custody. She had just learned medical records detailing her extensive psychiatric history would be raised, said Crown attorney Enno Meijers.

He reminded the jury that Campione had previously told her sister that if she couldn't have Serena and Sophia nobody could. Court heard evidence that drowning would take two minutes or more under water, Meijers said.

"Think about holding a child under water for two minutes," he said. "Then think about doing it again. That's plenty of time to reconsider...obviously Elaine Campione did not change her mind."

Minutes after Campione calmly called police on Oct. 4, 2006, saying her children were dead, officers found the girls in their mother's bed, dressed in their pyjamas, holding hands and lying with a photo album and a rosary.

A videotape was found in the room on which Campione addressed the camera speaking as if she and her daughters were dead.

"Leo, there are you happy?" she says. "Everything's gone...The idea that you could actually have my children -- God believes me and God's taking care of them now."

She goes one to spew vitriol about her ex-husband, calling him a "hideous monster" and "the devil" and telling him to stick his engagement ring "where the sun don't shine."

"I want you to know how much I hate you," Campione says on the video. "You couldn't leave us alone. You wanted to win and you won...Are you happy?...You beat your wife to death and your children and don't you ever, ever, ever forget it."

There is no mistaking the tone of the video as "pure, vindictive hatred," Meijers said Friday in his closing arguments.

"What these officers walked into was a set...a stage set for a grand gesture," he told the jury.

In the months leading up to the killings Campione believed she was being followed by people trying to kill her and take the girls away, Cremer has told the jury. She exhibited bizarre behaviour including refusing to let one of her daughters touch anything red and claiming she saw aliens, Cremer told court.

Campione had been hospitalized a number of times for psychosis and a suicide attempt and was worried her medical records would be brought up at the upcoming custody hearing, court has heard.

There is no doubt that Campione was not mentally well at the time, Meijers told the jury, but that's not enough find her not criminally responsible.

For such a finding the jury must be satisfied mental illness rendered her incapable of knowing what she was doing was wrong, he said.

Ontario Superior Court Justice Alfred Stong will begin giving the jury instructions on Tuesday before it begins deliberations. If Campione is found not criminally responsible she will be referred to the Ontario Review Board, which will decide an appropriate psychiatric facility to send her to and in annual hearings will assess her progress to see if or when she can be released.