More than 40 per cent of food bank programs close amid pandemic, city says

TORONTO -- The COVID-19 pandemic is creating serious issues around access to food for the vulnerable population in the Greater Toronto Area.

“We’re seeing new people coming, people who either went to other food banks that have been shut down because they can’t get into their facility, they don’t have staff, they don’t have the resources keep in running,” Maj. Rob Kerr with the Salvation Army said.

Kerr said with more people staying home during the crisis, there’s been a decline in donations at a time when the need is growing.

In Toronto, the city said Monday more than 40 per cent of food bank programs have closed.

Monday, Mayor John Tory said at companies like Loblaws Companies Limited, Sobeys and Heinz have stepped up with donations.

He said the city is working to find solutions and is looking at everything from facilitating food bank programs at Toronto housing buildings, libraries and communities centres, to grocery gift cards for families.

A new program for seniors to have groceries delivered is being activated through the Red Cross starting Tuesday by calling 1-833-204-9952.

“With support from United Way Greater Toronto, this service is made available for qualifying seniors and others that are in self-isolation and do not have alternative access to food through family, friends, or other food delivery services, and are not receiving assistance from another community food program,” a news release said.

The city said it’s also working with United Way Greater Toronto and other agencies to identify the greatest needs and said calling 211 is the best source for food program availability. There is also a map of services.

The latest data from PROOF, a team of Canadian academics studying food insecurity, found before COVID-19 close to one in seven households in Toronto faced food insecurity.

That includes worrying about access, having an income barrier, the quality and quantity of food consumed by children, missing meals or going without food. It’s problem now being exacerbated.

“What we’ve had is a whole bunch of people who has had their income ripped out from under them,” Valerie Tarasuk, a PROOF investigator and nutritional sciences professor at the University of Toronto, said.

“People in lower wage jobs and renting. Those are ones we need to worry about,” she added.

Tarasuk, along with FoodShare, one of Canada’s largest food justice organizations told CTV News Toronto one of the best ways to help the vulnerable and people falling through the cracks is by helping them access more money.

“I think what COVID-19 is really doing is exposing how thread bare our social safety net it and the fact that we need to actually work to fix the inequalities that cause people to be food insecure,” Paul Taylor, with FoodShare, said. 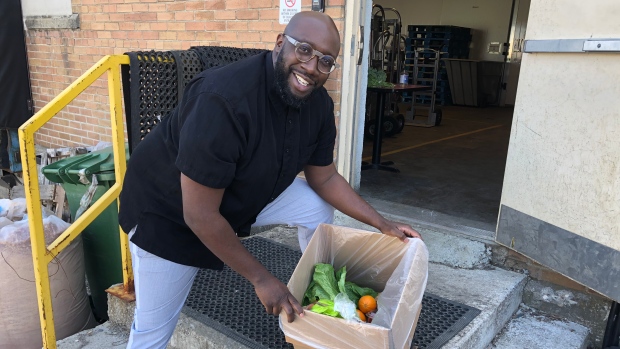 Taylor said the announcements by governments so far haven’t been universal.

The City of Toronto said residents, who are able, are encouraged to donate non-perishable food to food banks or drop-off food donations at local fire halls.

Restaurants or food businesses with surplus food are encouraged to donate to Second Harvest.

The Salvation Army said because all food donated to their organization is being quarantined for 72 hours, it’s now looking for monetary donations. It said this also allows the organization to purchase some foods in bulk at lower prices.