More than 40 dogs brought to Toronto after 'traumatic' hoarding situation

TORONTO -- A network of animal welfare agencies say a miracle allowed them to bring dozens of dogs to Toronto this past weekend after they were removed from a “horrific” hoarding situation in Thunder Bay, Ont.

A rescue team with the Northern Reach Rescue Network found the 47 dogs starving, in need of urgent medical attention, soaked in their own urine and feces and sectioned off into groups inside a Thunder Bay residence.

Melissa Murray, the co-founder of Rescue Foodie, said her organization was already on its way to Toronto for another rescue when she heard about the dogs, which were all small Maltese Shih Tzu.

“The moons aligned, we were able to bring the dogs down to Toronto immediately,” she told CTV News Toronto. “In the day they were rescued, and by evening we were able to transport them for urgent care.” 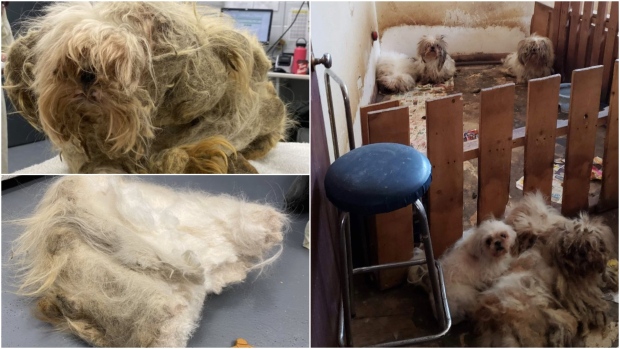 Seven received care in Thunder Bay, while the other 40 were taken to Toronto and dropped off at various animal welfare agencies.

“We do a lot of these transports, we’ve transported thousands of dogs, but this was without doubt the hardest one,” Murray said. “Some had their fur so matted they couldn’t walk, even when they were cleaned up they still had difficulty.

“This was the most traumatic thing we have ever experienced.”

Sixteen of the dogs, with the most urgent medical issues, were taken to the Toronto Humane Society.

“Two of them needed to be put on fluids, as well as antibiotics … some of the more severe cases were emaciated and dehydrated,” the agency’s spokesperson Hannah Sotrupa told CTV News Toronto. “It took an hour [for] each dog to shave the mats; that is how thick they were.”

On Saturday, Toronto Humane Society, together with Rescue Foodie, brought in 16 of over 40 dogs found in one home.

With your assistance, we can continue to help these animals and more like them. https://t.co/br2BgyEo3V pic.twitter.com/F9JDxmpgp4

The dogs at the humane society are recovering, but they require ongoing dental and medical treatment. Five of the dogs may lose their eyesight because of infections that went untreated.

An investigation into the incident is ongoing, but Murray said she was told the owner of the home, where the dogs were found, had recently died.

She said a relative, of the person who died, found the dogs and called the Ontario Provincial Police. The animals were eventually removed and fed immediately by the Northern Reach Rescue Network.

“There’s an overwhelming sense of relief that everything worked out in time,” Murray said. “It was a unique situation. We never saw anything like this in our time in rescue.”

Sotrupa from the humane society said it is important to remember that animal hoarding is a very serious mental illness.

“A lot of people don’t understand that it falls under the category of mental illness,” she said. “It is hard when you look at these precious beings that are being neglected, but it is also important to remember the humans that are suffering.”

When the animals have recovered at the Toronto Humane Society, they will all eventually be put up for adoption, Sotrupa said.