Massive fire in Hamilton engulfs dozens of homes under construction

Massive fire in Hamilton engulfs dozens of homes under construction 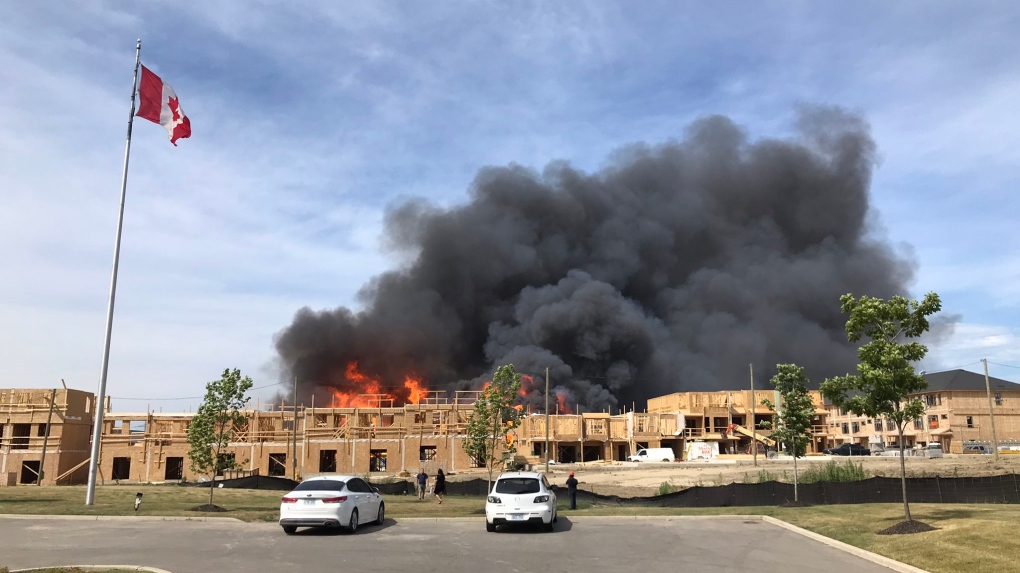 A massive fire has broke out in Hamilton on July 11. (Supplied)

A massive fire engulfed dozens of homes under construction in Hamilton on Monday afternoon.

The fire broke out in a new Losani Homes development near Rymal Road and Upper Red Hill Valley Parkway on Monday just before 4 p.m.

Hamilton Fire Chief Dave Cunliffe said the fire consumed 23 units at various stages of construction. In addition, 12 units directly adjacent to the fire were damaged, with their windows shattering from the heat.

“In this case, a lot of the units were still under construction so they hadn't been closed in yet, so they were open to the elements and certainly as the wind starts to pick up when you start to have an open flame like that, it moves very quickly,” Cunliffe said.

The direction of the wind, which was moving south to north, also helped to spread the blaze more quickly, the fire chief said.

Cunlifee said 70 firefighters were deployed in order to fight what he described as a four-alarm fire and the emergency crews are likely to be on the scene “for some time” as they continue to put out hot spots.

“At this point, the fire is under control,” he said. “For the most part there has been no damage inside of any of the homes that are occupied.”

HFD crews operating in the area of Rymal and Red Hill. Roads are closed. Crews will be operating on scene for some time #StrongForYou #HamOnt pic.twitter.com/T13GI1zdRQ

A number of vehicles in the vicinity of the blaze were either damaged or consumed by the fire, along with service trucks that were in the area.

There are several road closures in place due to the fire.

So far there have been no reports of injuries.

The Ontario Fire Marshal’s Office has been notified to assist with the investigation, along with Hamilton police.

Damage is estimated to be at least $10 million.