Crews continue to slowly restore power to areas of Ontario severely damaged by a deadly storm that tore through the province over the weekend.

The Saturday thunderstorm, while short lived, resulted in significant damage across southern and eastern Ontario. Violent winds up to 132 kilometres an hour knocked down multiple trees, hydro wires and transmission towers, leaving more than 500,000 customers without power.

As of Tuesday morning, Hydro One says that crews are working to restore electricity to more than 150,000 homes.

“Hydro One crews, along with crews from other utilities and contractors, are working as quickly and as safely as possible in order to restore power to customers that remain without power,” a statement on the company’s storm outage page says.

“Damage includes over 1,000 broken poles and just as many downed power lines, along with countless trees and large branches causing power outages. Restoration efforts are expected to continue over the coming days.”

At least 10 people died in the storm—the majority were fatally struck by falling trees while one person was in a boat that capsized.

Of the reported deaths, one individual was struck by a falling tree on Sunday in the aftermath of the storm; although officials have not officially confirmed whether or not the incident was related to the weather event.

Some schools in Durham Region and Ottawa were closed on Tuesday as a result of the power outages.

“The decision to close these schools has been made to protect the health and safety of students, parents/guardians and staff as electricity is needed to safely operate a school,” the board said in a statement.

“Many students in the area of these schools may also be without power and therefore, not able to access virtual learning. For this reason, there will be NO remote learning taking place at those schools.”

All schools and child-care centres within the Ottawa-Carleton District School Board are also closed. 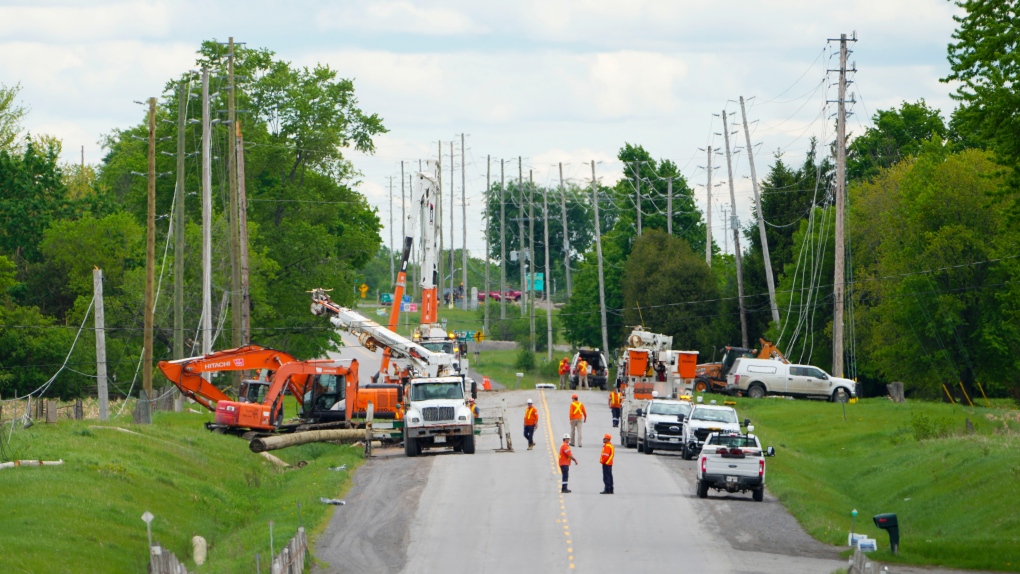 Hydro Crews work to fix broken power poles and restore power in the Ottawa Valley municipality of Mississippi Mills, Ont. on Monday, May 23, 2022. A major storm hit parts of Ontario and Quebec on Saturday, May 21, 2022, leaving extensive damage to infrastructure. THE CANADIAN PRESS/Sean Kilpatrick

The Town of Uxbridge was particularly hard hit. The local government has declared a state of emergency due to storm damage.

More than 35 families had been displaced as of Monday night and engineers are on scene to assess which buildings need to be torn down.

One of those buildings is the Second Wedge Brewery, which had just opened on the long weekend and now doesn’t have a roof.

Garrard said the brewing equipment is not damaged, but the business is stuck in limbo.

“If it’s a tear down, our adjuster has estimated it could be a year,” he said. “I’m not sure what that means for us because I don’t think we can sustain a year.”

Ashley Woodhams told CTV News Toronto she was out of town when the storm struck and returned to find her home destroyed.

“I'm going to guess they're going to tear it down,” she said. “The walls are all cracked. We have no windows left. The floors are shaky. We're just trying to get everything that’s valuable to us and sentimental out.”

The high winds tore roofs off of homes and trees collapsed on properties.

“They think it's repairable but the one side is unstable,” resident Pat Lawrence said. “It's been unreal walking around.”

The town has submitted an application to the province for disaster relief funding.

“We are going to be there through municipal affairs,” Ford said. “We will be there to support any community right across the province.”

The mayor of Uxbridge said that whatever action is taken, it won’t be a short-term fix.

“We have buildings that will need months of renovation or a complete rebuild,” Dave Barton said.

Gerald Cheng, a meteorologist with Environment Canada, said it is unclear whether or not the thunderstorm turned into a tornado in this region, as a data analysis is still taking place.

With files from Mike Walker and Chris Herhalt