A Toronto doctor's skills were put to the test last month when she was called upon to help perform a delivery on a transcontinental flight.

Dr. Aisha Khatib says she works well under pressure, so when the flight attendant on her Qatar Airways flight asked if there was a doctor on board, she wasted no time volunteering her skills.

The flight departed from Qatar on Dec. 7 and was bound for Uganda, where Khatib was travelling for work.

“It was about an hour into the flight,” Khatib told CTV News Toronto on Friday. “They basically asked if there was a doctor or medical personnel on board.”

Khatib, who works as the clinical director of travel medicine at MEDCAN and assistant professor with the Department of Family and Community Medicine at the University of Toronto, was directed to the back of the plane, where a woman appeared to be in labour.

Is there a doctor on the plane? 🙋🏽‍♀️👩🏽‍⚕️Never thought I’d be delivering a baby on a flight! ✈️ @qatarairways Thanks to the airline crew who helped support the birth of this Miracle in the air! Mom and baby are doing well and healthy! #travelmedicine pic.twitter.com/4JuQWfsIDE

“I saw this woman — she was lying with her head towards the aisle and her feet toward the window and the baby was coming,” she said.

Khatib says her training kicked into gear and she immediately began to help the woman.

“Someone threw me a pair of gloves and we had to lean over this woman to get this baby as it was coming out,” she said.

Khatib says she had to force herself into the small space between the window and the woman’s legs in order to access the delivery.

“I was right up against the window with mom pretty much straddling me as I'm trying to get enough blankets underneath to decrease the chance of having a mess,” she said. 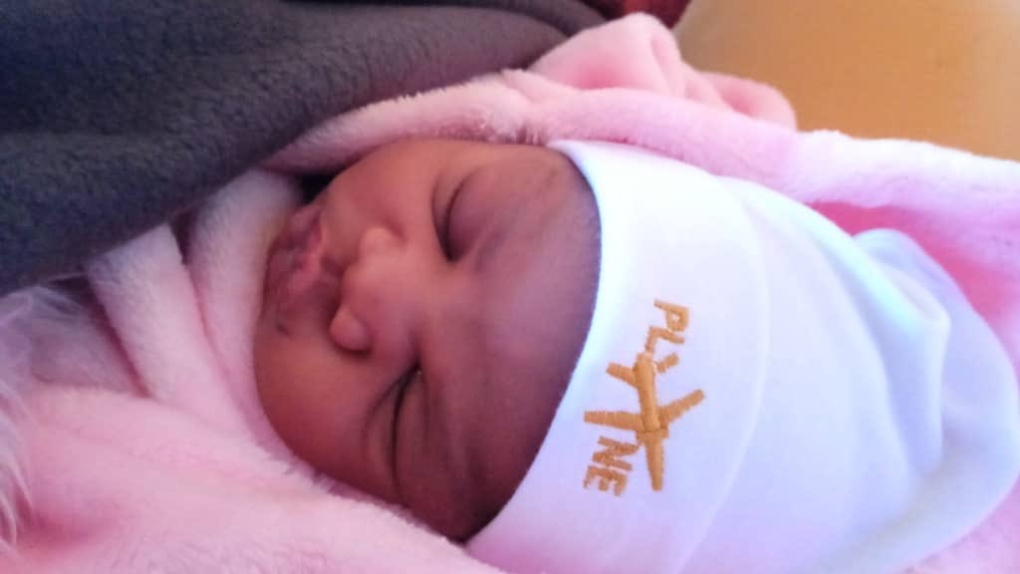 “I was just thinking ‘I need clamps. I need scissors. If I don't have clamps, I’ll need shoelaces’ and just trying to figure out what to do with this situation if I didn't have the materials.”

Luckily, Khatib said the flight crew was equipped with a delivery kit, giving her access to birthing tools needed.

Aided by two other medical professionals flying that day — a nurse and a pediatrician — Khatib says she was able to deliver the baby girl in a healthy and safe manner.

“I was able to cut the cords, cut the umbilical cord. And check the baby over,” she said. “The baby was crying and had colour and so I gave her a good rubdown and passed her over to the pediatrician,” she said.

The successful delivery was met with a round of applause from onlooking travellers.

“Mom looked okay — she looked stable, so I was like, ‘Congratulations. It's a girl!’ and the whole plane just started clapping,” Khatib said.

“I had totally forgotten I was delivering a baby on a plane.”

Both the mother and baby were in good enough shape to continue for the remainder of the flight. They were moved to first-class and monitored for the remaining five hours, Khatib said.

In a tweet, Qatar Airways said they are "truly grateful for the incredible efforts" of Khatib and are glad to hear the mothe rand baby are doing well.

Welcome to the world, baby Miracle Aisha! We are truly grateful for the incredible efforts of Dr.@AishaKhatib, together with our cabin crew, whose swift action ensured a safe delivery in the sky on #QatarAirways. Glad to hear mom & baby are healthy & well! https://t.co/m8CIBVKtD2

The mother, a Ugandan woman, decided to thank Khatib by naming the baby after the doctor.

Khatib says she has kept up with the mother and baby, both of which she says are doing well in Uganda.

As a token to remember her by, Khatib left the baby girl with a small gift.

“I happened to be wearing a necklace of my name in Arabic at the time and so I gave it to her,” she said.

“I wanted her to know where she came from — delivered by a lady named Aisha as we flew over the Nile.”

Cheese not on the table in Canada-U.K. trade talks as Britain seeks market access

Britain wants greater access to Canadian markets for more than 700 varieties of cheese including Stilton, Cheshire, and Wensleydale, a crumbly variety originating from Yorkshire. But Ottawa has made it clear it does not want to see more British cheddar, let alone artisan varieties such as stinking bishop, renegade monk and Hereford hop, on Canadian fridge shelves.