Power has been restored in Toronto's downtown core after an hours-long outage caused major disruptions in the city Thursday.

Hydro One confirmed the restoration around 8 p.m., saying that some 10,000 residents and businesses who had been without power for most of the afternoon and evening now have electricity.

“Safety is always our top priority. We know this power outage has made today exceptionally difficult for many of you, and we appreciate your patience,” David Lebeter, chief operating officer of Hydro One, said in a statement.

“We had all available resources helping to restore power as quickly and safely as possible. I want to thank all of those affected by this outage for their patience and Toronto Fire and Toronto Hydro for their collaboration.”

Officials said the outage was caused by a large crane that struck a high-voltage transmission line earlier in the day.

In a statement, officials confirmed that a barge moving a crane in the upright position ran into the lines in the Port Lands area. This in turn caused a ripple effect, resulting in damage to equipment at a power station near The Esplanade and Lower Sherbourne Street.

"In the coming days, crews will continue work on the lines damaged by the crane." 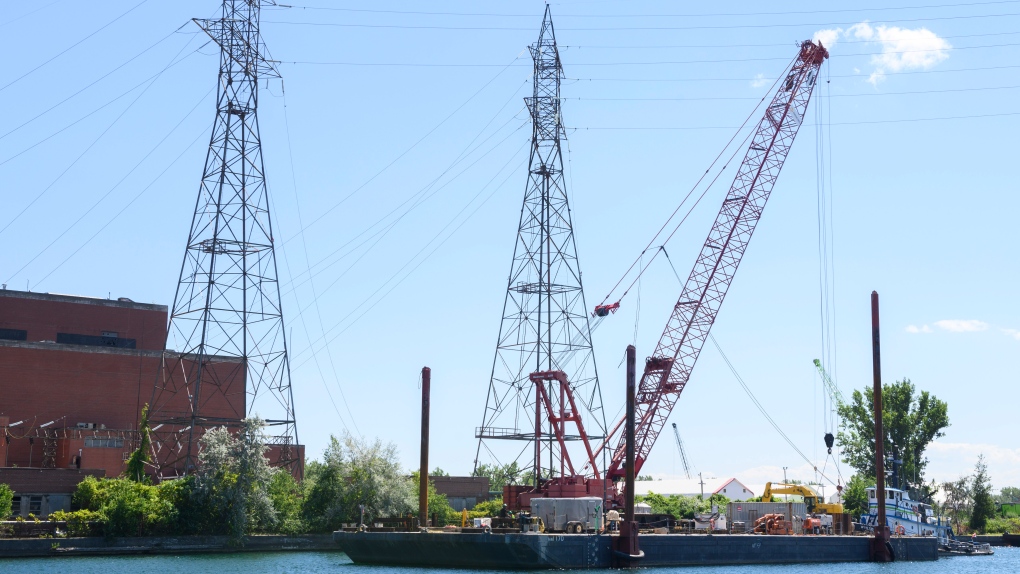 The site of a collision between a barge carrying a crane and power lines, in Toronto, on Thursday, August 11, 2022. THE CANADIAN PRESS/Christopher Katsarov

Several blocks within the Financial District and the area of Yonge and Dundas streets, including Yonge-Dundas Square itself, lost power just after 12:30 p.m.

The big screens that usually display advertisements in that area were also down.

Other areas affected by the outage included the Toronto police headquarters, St. Lawrence Market, Toronto City Hall, and the Eaton Centre, which was forced to partially close at one point but has since reopened. 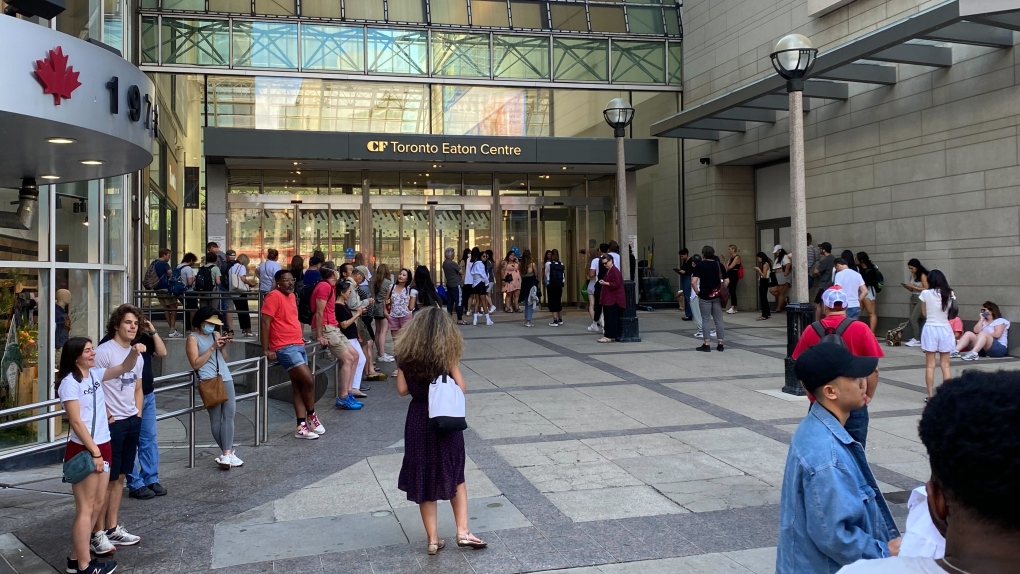 Shoppers are shown standing outside the Eaton Centre during a massive power outage in downtown Toronto on Thursday.

Toronto Hydro's outage map showed the areas within College Street to the Gardiner Expressway and between the Bayview Extension and University Avenue were without power. 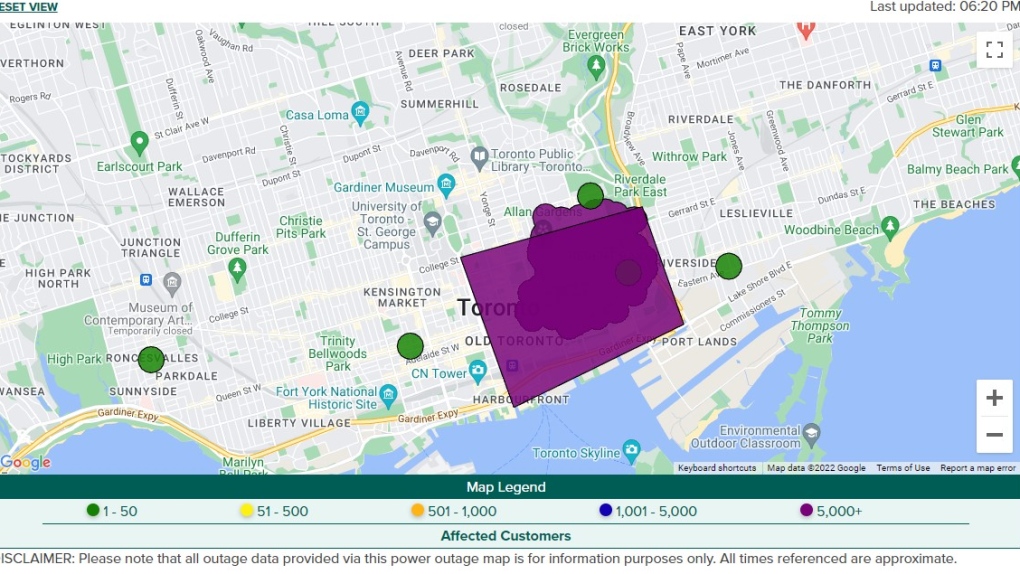 A map showing power outages in Toronto is seen in this image. (Toronto Hydro)

Toronto Hydro told CP24 earlier in the day that a large crane in the city’s Port Land’s neighbourhood had struck a high-voltage transmission line, though it was unclear at that time if that was the cause of the outage. 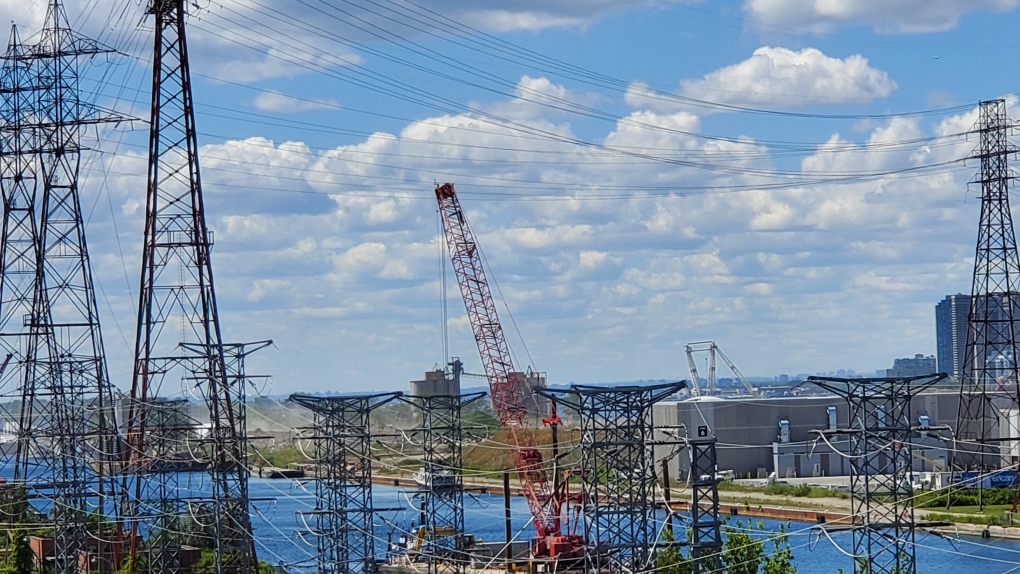 A crane that struck a high-voltage transmission line in downtown Toronto on Thursday August 11, 2022. (Twitter/Hydro One)

In a follow up tweet, Hydro One -- which had been working alongside the city’s power utility throughout the outage -- all but confirmed the impact of the crane was the source of the outage with images attached of the “transmission circuit that's been affected.”

It’s unclear how the crane was able to make contact with the high-voltage line that left so much of the downtown core without electricity.

Officials with the City of Toronto said they have launched a full investigation into the downtown outage.

In a statement, officials said the outage may have been caused by a subcontractor to Southland-Astaldi Joint Venture (SAJV), a contractor for the Ashbridges Bay Treatment Plant outfall project.

"An investigation is currently underway after a barge with a crane came into contact with overhead Hydro One wires," the city said. "The incident occurred away from the construction sites while the barge was in transit within the Port of Toronto water ways."

Today's power outage caused a tremendous disruption to residents in the downtown core – it should not have happened and I'm thankful this wasn't a much worse situation. pic.twitter.com/Gd2j7RYMZM

The city said it has also requested a full report from SAJV in order "to understand what happened and what needs to be done to ensure this does not happen again."

As Atlantic Canadians grapple with the aftermath of destruction caused by Hurricane Fiona, CTVNews.ca takes a look at major hurricanes that have wreaked havoc in the country throughout history.

A gunman killed 13 people, including seven children, and wounded 21 other people in a school in central Russia on Monday, authorities said.