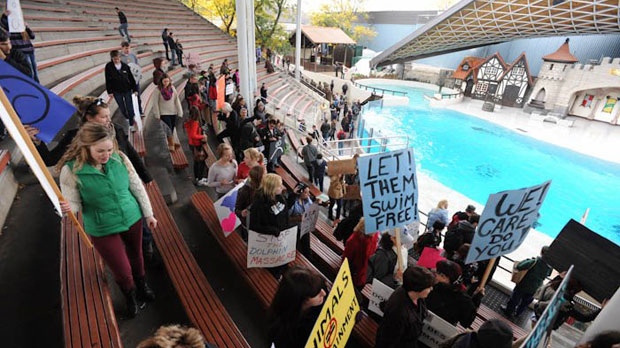 TORONTO -- Marineland has taken several steps to improve animal care after allegations of mistreatment at the Ontario attraction captured the attention of activists and regulators last year, investigators said Tuesday.

The Ontario Society for the Prevention of Cruelty to Animals said the Niagara Falls amusement park has complied with four out of seven orders issued as part of the agency's investigation into the allegations.

The agency's chairman, Rob Godfrey, said Marineland has asked for -- and been granted -- more time to fulfil the remaining orders.

"We're here to enforce the laws of the province of Ontario and to do so within reason as well," he said, noting the park had solid reasons to request the extension.

But he stressed the agency will continue to monitor Marineland until it is satisfied all the improvements have been carried out.

A spokesman for Marineland wouldn't comment on the OSPCA's remarks, but said the company is stunned the agency would openly discuss an active investigation.

Godfrey said it's unusual for them to do so, but defended the move in the name of public interest.

"The public needs to have the confidence in a few things: One, that we are doing our job as the enforcers of the Ontario SPCA Act.

"Two, that the public can trust, when they go to a place like Marineland, that they're operating in a manner that respects the welfare of their animals," he said.

The completed work involved having a vet examine the park's pinnipeds -- a family of animals that includes seals and sea lions -- repairing the ceiling of an animal enclosure, improving the killer whale's living environment and conducting a full assessment of the water filtration system, he said.

Godfrey said investigators had asked Marineland to separate its male bears from the rest to protect any cubs, but the company instead offered to neuter the animal, thus reducing their aggressiveness.

The procedure must wait until the bears emerge from hibernation, he said.

An order calling for increased shelter for deer and elk is on hold until the thaw, he added.

And the last outstanding order, for improvements to Marineland's water quality and filtration system, requires help from experts, he said.

The amusement park has been under scrutiny in recent months after a number of former employees claimed the quality of the water compromised the health of the animals.

The uproar led the Ontario government to vow to beef up its animal welfare laws to ensure the safety and health of animals kept in zoos and aquariums, including Marineland.

The province promised to introduce the legislation by spring.