TORONTO -- A 54-year-old man is now facing multiple charges after he was allegedly found by officers in a Vaughan parking lot with open beer cans and a loaded firearm inside his car.

According to investigators, officers were dispatched to the area after a concerned citizen dialed 911 around 1:30 a.m. on Jan. 11. The citizen said they were trying to help a man outside a coffee shop near Keele Street and Rutherford Road.

In video released by York Regional Police on Wednesday morning, the caller can be heard saying that they witnessed the man walk around and “fall a couple times.”

“He dropped his glasses so we just went out to help him,” the caller said. “He was not OK.”

When officers arrived at the parking lot, they found a man inside a vehicle with its engine on.

Police can be heard in the video asking the driver if he had anything to drink, and the driver responds “absolutely no.”

“When officers spoke with the driver, they could smell alcohol and saw open beer cans inside the car,” police said in a news release. “The driver was given a roadside breath test, which he failed and was placed under arrest.”

Police said that officers found a loaded handgun and a box of ammunition on the front passenger floor of the car at the time. They also said the driver had a blood-alcohol level that was so high he “needed to be taken to hospital as a precaution.” 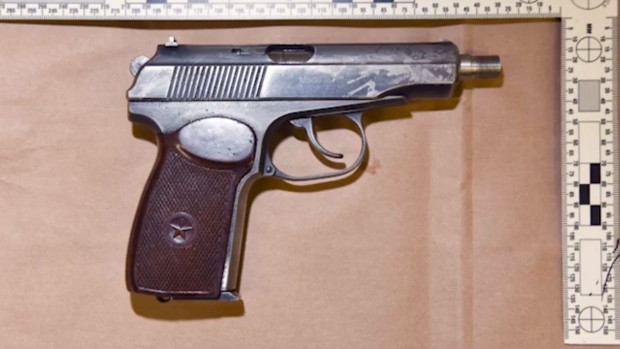 The suspect, who has been identified by police only as a Richmond Hill resident, is facing numerous charges, including impaired operation of a vehicle with a blood-content level of over 80 milligrams, unauthorized possession of a firearm, and possession of a restricted firearm with ammunition.

According to York Regional Police, officers received about 3,500 reports regarding suspected impaired drivers last year. More than 1,700 impaired-related criminal charges were laid as a result.

“If you see dangerous driving or behaviours on the road that could jeopardize the safety of motorists and pedestrians, you are encouraged to call 911 immediately,” police said. “York Regional Police continues to remind residents that the safest amount of alcohol or drugs to consume before you drive is zero.”