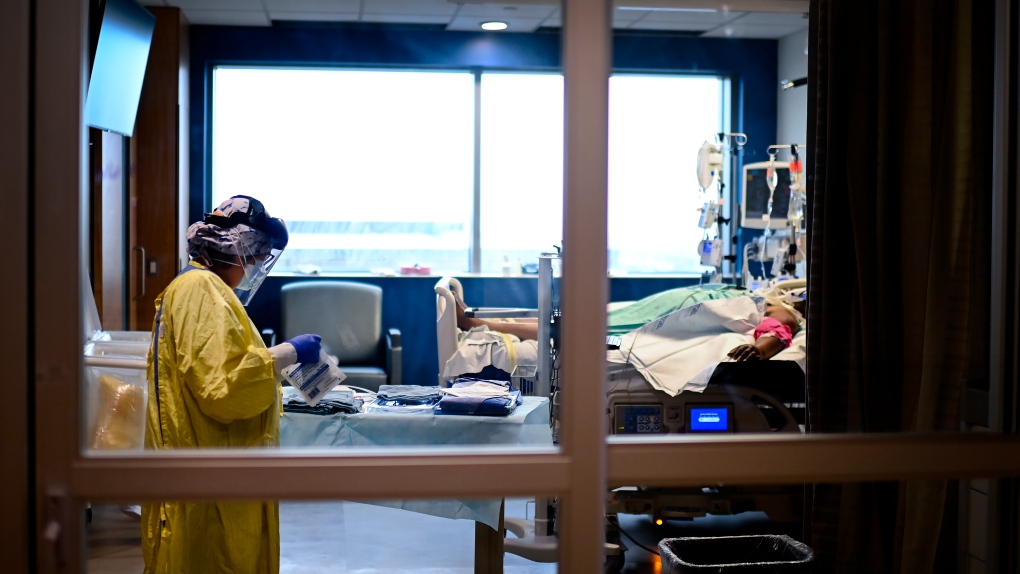 An ICU health-care worker shown inside a negative pressure room cares for a COVID-19 patient on a ventilator at the Humber River Hospital during the COVID-19 pandemic in Toronto on Wednesday, December 9, 2020. THE CANADIAN PRESS/Nathan Denette

TORONTO -- Brampton is commemorating a major COVID-19 milestone with no virus-related patients in intensive care units (ICU) for the first time in the pandemic, Mayor Patrick Brown says.

While speaking at the city’s weekly coronavirus press briefing on Wednesday, Brown said that there are currently zero patients with the deadly virus in ICU at Brampton Civic Hospital.

“The fact that we don't have a single patient in ICU is incredible, an incredible sign of progress and the success of the vaccination effort,” Brown said.

There are currently three people with the virus at Brampton Civic but they don’t have severe illnesses that would require them to be in ICU, Brown said.

The milestone is a dramatic improvement from the spring when nearly 140 patients were transferred out of Brampton Civic Hospital as the hospital system was overwhelmed with a spike in infections.

“There was a time when we were literally transferring out 100 patients a week from Brampton Civic Hospital. We'd be sending into hospitals around Southern Ontario by land, by air. We were so overwhelmed, our hospital capacity, that we had to depend on the hospital system throughout southern Ontario,” Brown said.

Skyrocketing hospitalizations during the height of the third wave, which surpassed 2,700 cumulative at one point in Ontario, resulted in a temporary halt to all non-emergent and non-urgent procedures across the province.

Brampton has been one of the hardest hit cities across the province throughout the pandemic, making up roughly 59.5 per cent of all COVID-19 cases in Peel Region.

Over 3,200 patients have received treatment for the virus in Peel Region hospitals and 478 patients have been admitted to ICUs since January 2020.

There have been 845 confirmed virus-related deaths in Peel Region.