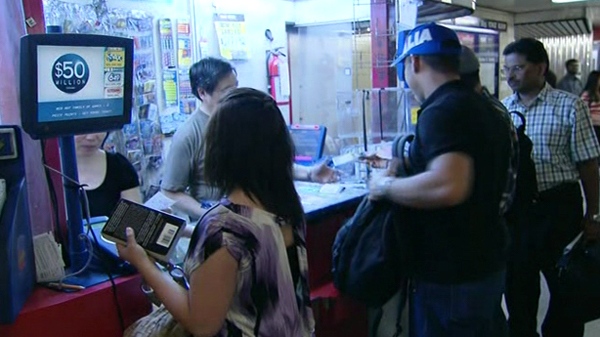 People line up to buy Lotto Max tickets at a subway station in Toronto, Friday, June 4, 2010

TORONTO - Canadians snapped up tickets for Friday night's Lotto Max draw where the jackpot had hit the maximum of $50 million.

At a kiosk in Toronto's Eaton Centre, Ron Quin, 62, showed off his ticket and said he would travel and share money with his family if he struck it big.

I would definitely take a trip to Acapulco with my family," said Quin, who works for Brewers Retail.

"I would make them each a millionaire and look after a few friends and donate some money to the Sick Children's Hospital."

Retailer Anas Mortala, 29, said sales were pretty good Friday morning at the Gateway Newstands with a lot of people buying tickets. He said most people were buying more than one ticket.

Artist Harold Safre, 51, said if he won he would buy some land but wouldn't live too luxuriously.

Valmiki Rempersad, 48, who works for the Ontario Securities Commission, is playing with a group of 13 others from work. He knows what he would do if he won.

"Probably pay off bills, pay off the mortgage, help friends and probably donate some money to charity."

Ticket sales were up 84 per cent nationally and 87 per cent in Ontario compared to last week, said Ontario Lottery and Gaming Corp. spokeswoman Sarah Kiriliuk.

Tickets could be purchased until 9 p.m. Eastern and the draw was set to begin around 9:30 p.m.

Because the jackpot topped out, the lottery kicked into so-called Maxmillions mode, so separate draws were to be held for an estimated five additional $1-million prizes.

Lottery officials expected the unofficial winning numbers would be posted by midnight.

Whether any winning tickets were sold and from where should be known by about 3 a.m. Saturday, said Kiriliuk.

It was only the third time the jackpot reached its top level and triggered the Maxmillions draws since the game was launched in September.

To win the jackpot, or one of the extra Maxmillions prizes, players must match all seven numbers drawn.

If there is no winner in Friday's draw, the jackpot remains $50 million but the number of Maxmillion draws rises to 20 additional $1 million prizes for a potential $70-million payout by the lottery corporation.

In February, two tickets split a $50-million Lotto Max draw -- one in Quebec and the other in British Columbia.