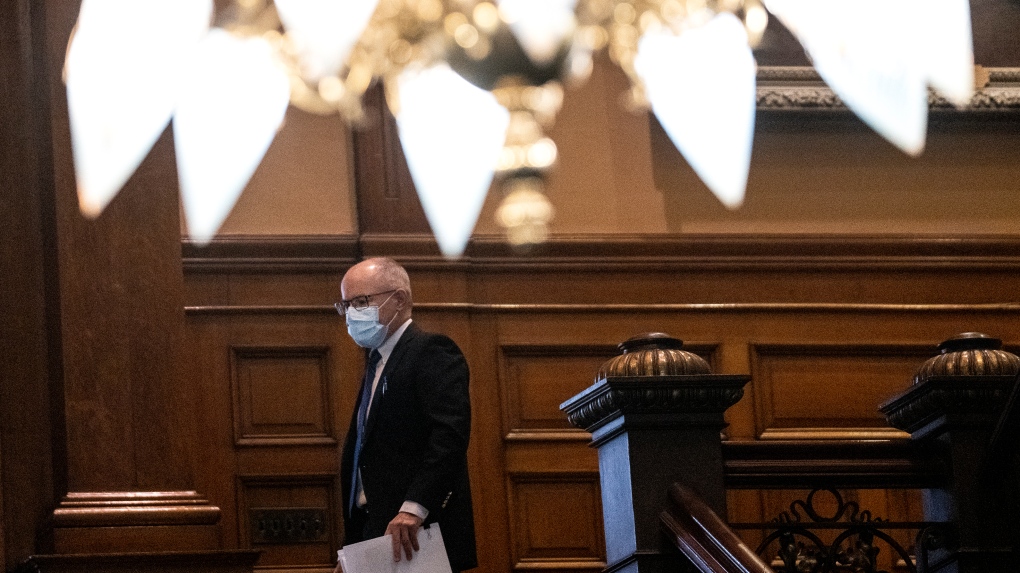 Dr. Kieran Moore, Ontario's chief medical officer of health makes his way to a press conference regarding the lifting of most mask mandates for indoor settings in Ontario at QueenÕs Park in Toronto on Wednesday, March 9, 2022. THE CANADIAN PRESS/Nathan Denette

Three local medical officers of health have written a joint letter to Ontario's top doctor, asking him to bring back mask mandates in schools and other indoor public settings.

They praised Moore for extending mask mandates in hospitals, long-term care homes, transit and other high-risk settings until June and urged him to widen it further to include indoor public places, including workplaces, schools, universities, colleges, and essential service places like pharmacies and groceries.

"To be fully effective and clear in communication to Ontarians, we believe this is needed at a provincial, not a local level," the letter reads.

"Like you, we had hoped that as masking and other protections ceased to be requirements, that we would be able to get through this wave without much suffering or long-term disruption. Unfortunately, this does not seem to have played out as we had hoped."

In March, the Ford government lifted the mask mandate for most settings. That decision, according to a brief from Public Health Ontario (PHO), contributed to the province's sixth wave which saw about 100,000 to 120,000 daily cases at one point in April.

The surge led to repeated calls for the government to reintroduce masking, especially in schools. But, the province repeatedly insisted that it was not needed.

In their letter, the three doctors noted that COVID-19 hospitalizations in their regions continue to exceed figures from previous pandemic waves. It led Niagara's main hospital to ramp down surgeries to 70 per cent, they said, adding that, earlier this week, 100 patients were admitted without a bed.

"The COVID-19 pandemic has clearly had a disproportionate impact on the individuals and communities with the worst social determinants of health. The current persistently high transmission of COVID-19 is exacerbating inequalities in our society," the doctors wrote.

"This subjects those with inequities to more infections, more hospitalizations, more isolation from work and school, more lost income due to isolation, and more risk of long-term disability with Post-Acute COVID Syndrome (aka Long COVID)."

In the letter, the doctors highlighted the importance of masking in reducing COVID-19 infections, asking Moore to reconsider imposing mandates.

"The return of masking could help protect those with inequities and vulnerabilities, relieve the pressures on our hospitals, and most importantly protect the health of the people we serve," they said.

Dr. Peter Juni, the scientific director of Ontario's COVID-19 science advisory table, said earlier this week that it appears hospitalizations have also now peaked at 1,700. He added that a decline in wastewater indicators of COVID in the coming weeks would likely be followed by a decrease in hospital admissions.

"So whatever you're doing in terms of your behaviour — with contacts, masking, etc. — keep doing that for a few more weeks," he said. "But I think we're on the right track now."