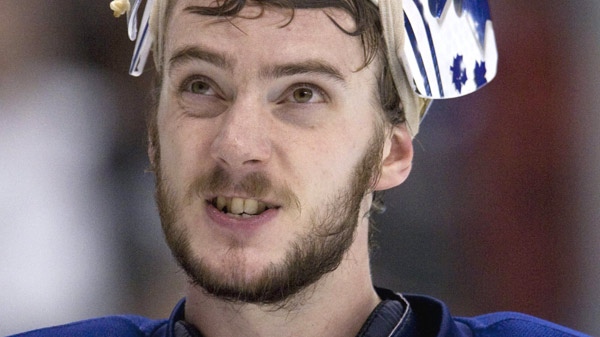 TORONTO - Rickard Wallin was standing in the Bell Centre corridor and knew something wasn't right.

Toronto Maple Leafs teammate Jonas Gustavsson didn't return to the ice at the end of the first intermission, so Wallin went to investigate. When he walked into the visitors locker room, he found a disturbing sight -- the 25-year-old Gustavsson was spread out on the floor and in some duress.

"Obviously, we all got worried when he was laying there in the room in Montreal," Wallin recalled Tuesday morning. "I wasn't playing that game and ... I went in to see him. You could see that he was worried at the time too."

Gustavsson would undergo his second heart ablation surgery a couple of days after the Dec. 1 game and faced another few weeks of recovery. It certainly wasn't the way he envisioned the start of his NHL career.

However, the goaltender's fortunes have been improving ever since and culminated with him being named Toronto's nominee for the Masterton Trophy on Tuesday. The award recognizes "perseverance, sportsmanship and dedication to hockey" and is voted on by the Professional Hockey Writers' Association.

Gustavsson has had several off-ice issues to contend with. His mom passed away shortly before he signed with the Maple Leafs as a free agent last summer and he underwent the first heart procedure just after moving to North America.

Despite that, Gustavsson has managed a 16-14-9 record while playing for one of the league's worst teams.

"I can't think of a professional athlete who has had two heart surgeries in the course of the season and managed to come back and play as well as he is," said Leafs coach Ron Wilson. "In addition to everything else he's had in his life in the past year with the change (of culture), his mom passing away. It's been a long year for him and he's really playing well right now.

"Is there any greater sign of perseverance than doing what he's done this year?"

Wallin and Gustavsson played together with Farjestads in the Swedish Elite League last season and made the move to Toronto at the same time.

The toughest thing Wallin believes his teammate has had to overcome is the loss of his mother. Gustavsson is an only child and Wallin says he was very close to his mom, especially after his father died a couple years ago.

He's impressed with how well Gustavsson has dealt with the obstacles that have come his way.

"He's had to handle stuff that most people wouldn't have to," said Wallin. "To me, he's the same person all the way along. I don't know how he handles it, but he just does. Whenever he plays, nothing ever seems to bother him."

J.S. Giguere didn't meet Gustavsson until arriving from Anaheim in a trade prior to the Olympic break.

The veteran goalie has since taken on a bit of a mentorship role with Gustavsson and the rookie responded with the best hockey of his season -- winning seven games in a row during one stretch in March.

Gustavsson will get his final start of the season when the Maple Leafs visit the New York Rangers on Wednesday and might end up playing for Sweden at next month's IIHF World Hockey Championship. After that, he'll take some time to relax in his homeland.

He acknowledges that it's been a tough stretch.

"It's been ups and downs the last one-and-a-half years or so, but you can't just lay down and feel sorry for yourself," said Gustavsson. "You have to just keep working and appreciate all the fun stuff you get to do."

There's been no shortage of fun when he's been on the ice.

"Just being able to play hockey -- that's what I like, that's why I've worked so hard," he said. "I don't need an award for that."