Leafs coach likes what he sees in 'frat pack' line 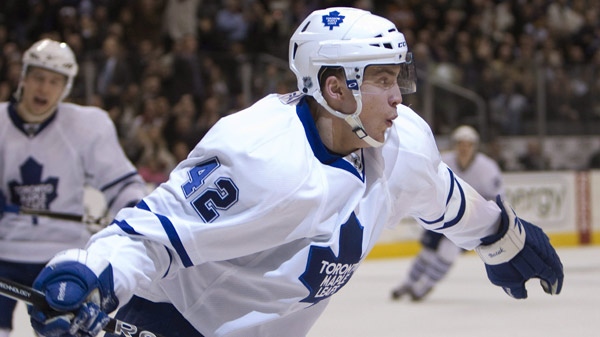 Wilson, who felt his team was listless through the first half of Tuesday's 3-2 loss to the Atlanta Thrashers, overhauled his line combinations, including a creation that featured Tyler Bozak between Viktor Stalberg and Christian Hanson.

The trio, dubbed the "frat pack" earlier in the year because all three played college hockey last season, will get another crack at proving they've got chemistry after catching Wilson's eye.

"I had to make some changes," Wilson said, noting the Leafs were completely flat to start the game. "All of a sudden Bozie's got the puck and he's able to make some plays and things started to happen.

"I'll keep that group together, they looked really good."

The move paid dividends because Stalberg scored twice to get Toronto back on even ground, only to see Atlanta seize the lead for good just 57 seconds after his second marker had tied the affair early in the third.

"We had to do something, shake the lines up a little bit," Stalberg said. "It ended up being us together and I thought we played pretty well in the third, but unfortunately couldn't get that tying goal."

Keeping the line together would be welcome news for Hanson, who enjoyed playing with two guys he's also skated with in the American Hockey League this year as a member of the Toronto Marlies.

"It's great. Those guys are two of my best friends and I think we really connect out there," he said. "We haven't played together, aside from a couple stints with the Marlies, since pre-season, so to be able to get out there on the same line, I think we gelled a bit."

Nobody on the Leafs brought their 'A' game early on against the Thrashers and Stalberg said for he and Hanson it was a case of being too jittery with the puck, rather than taking an extra second and making a quality play.

"I feel like both me and Christian, the first half of the game tonight, we were a little hesitant, just kind of banging the puck down the ice and not trying to make plays out there," he said. "That's what Wilson was harping on us on the bench, keep making plays and be a little more confident out there. Want the puck when you're out there, it's as simple as that.

"It was fun to play with (Hanson and Bozak) and I think both me and Christian played a lot better in the third."