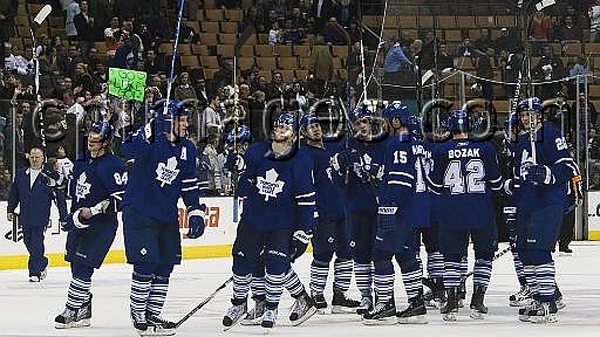 TORONTO - The Toronto Maple Leafs have a lot of work to do before October to rejuvenate their fans at Air Canada Centre.

The building was half empty when the final buzzer sounded on Tuesday's 2-0 loss to the Philadelphia Flyers -- the final NHL game played in the city this season. The young Leafs might have shown signs of promise during a nice run in March, but there weren't many signs of anticipation from a fan base about to enter a sixth straight spring without playoff hockey.

It's something the players understand.

"I would be frustrated if I would be them for sure," said goaltender J.S. Giguere, who made 21 saves against the Flyers. "You pay your ticket, (it's) very expensive and there's not much to show for it. I think people have to hopefully keep in mind the last little while here. Since March 3rd, we've been playing really well, I think there's a lot of hope in this dressing, a lot of good young guys with lots of talent.

"There's something to be enthusiastic about so hopefully we're not going to disappoint the fans next year."

Few would have predicted how tumultuous this season would become for the Leafs when they opened the season on home ice against Montreal back in October.

There was plenty of optimism surrounding the team then, although it started dissipating not long after the Canadiens came from behind for a 4-3 overtime victory on opening night. The Leafs ended up starting the year 0-7-1 and never got in the playoff race, prompting GM Brian Burke to start his rebuilding work early.

Only 11 of the 20 players who dressed on opening night were in the lineup for Tuesday's finale.

"We're a different team (now)," said Leafs coach Ron Wilson. "Whatever people want to say about our team, you can't compare the first half or the first two-thirds with the last third because it's an entirely different team.

"This team has an attitude when they go out, a little bit more of a swagger."

Outside of a couple fights in the first period, there wasn't much swagger against the Flyers.

Claude Giroux scored on a first-period power-play and Mike Richards hit an empty net for Philadelphia (40-34-6), which strengthened its grip on a playoff spot with the victory.

Brian Boucher was solid in earning the 17th shutout and 100th win of his career, diving across his crease late in the third period to keep a rolling puck out of the net. He finished with 23 saves.

The veteran goalie had gone 50 games since last earning a shutout.

Toronto finishes its schedule with a game against the New York Rangers on Wednesday and a visit to the Bell Centre in Montreal on Saturday. The Leafs have a 29-37-14 record and are destined to finish with the franchise's fewest number of points since putting up 69 in 1997-98.

However, the team feels its already got a head start on next year with some good play since the Olympic break.

"I think we've taken a step in the right direction in the sense of getting younger and faster," said Wilson. "There's still lots of things we have to address. When this group comes back, we've got to dig in and play harder in certain areas -- certainly in front of the other team's net."

The Leafs didn't seem to have much energy on Tuesday.

Giroux gave the Flyers a 1-0 lead at 10:59 of the first period, just six seconds after Mikhail Grabovski had been sent off for roughing. The 22-year-old took a nice pass from Danny Briere and beat Giguere for his 16th goal of the season.

Toronto would have several opportunities to tie it, but was undone by its power play once again. The Leafs squandered six opportunities with a man advantage to run their power-play drought to 30 without a goal.

"Our power play has been god awful a good part of the season," said Wilson. "We've got to find people who are going to do some of the grunt work like having (tough guy) Colton Orr on the last power play. It was the only power play where we had sustained pressure because he won some battles and retrieved some pucks."

There was very little sense of nostalgia as the home schedule came to a close. The Leafs players went to centre ice to salute what was left of the crowd and received mild applause.

Moments later in the dressing room, many of the Leafs were already predicting better times ahead.

"I heard it's the best city in the world to be part of a playoff run," said rookie forward Viktor Stalberg. "We want to be there as soon as possible. I think everyone sees that we probably have a team that's going to be pretty good next year."