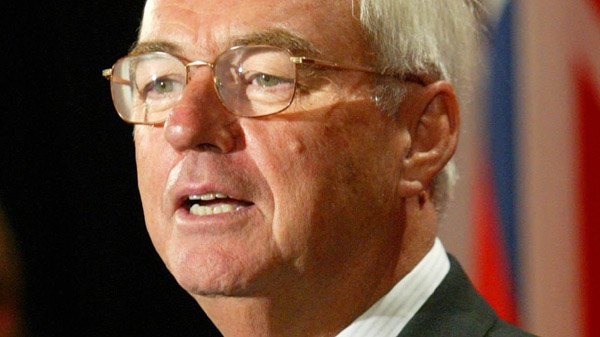 John Gerretsen speaks to the media after being sworn in at Queen's Park on Thursday Oct. 23, 2003. (Tobin Grimshaw/ THE CANADIAN PRESS)

TORONTO - A group representing dozens of lawn care companies trying to bring charges against Ontario's environment minister and senior bureaucrats over the province's controversial pesticide ban is now calling for charges against 23 activists.

Group spokesman Jeffrey Lowes of MREP Communications said Wednesday that information has been laid for criminal charges against 23 individuals.

The additional proceedings - 115 charges under Section 504 of the Criminal Code - were filed with a Kingston, Ont.-area court on Tuesday, Lowes said in a release.

The activists worked with the Ontario government to ban pesticides using alleged false and misleading information to undermine the industry, Lowes said.

The legal manoeuvre, if endorsed by the court, could result in federal charges being filed against Gerretsen and others by police or by a private individual, and there may be sufficient grounds for a criminal charge of fraud, Lowes said.

The action stems from Ontario's pesticide regulations, which permit the use of azadirachtin, a chemical that is not approved for use in Canada, Lowes said.

"There's something fundamentally wrong with the whole system," he said.

The government's reclassification of pesticides is based on a methodology that "was not based in regulatory science," he said.

Lowes said Feb. 17 has been set for a hearing to set a date for hearing on all of the charges.