TORONTO -- Seated on a cold concrete floor, seven-year-old Thomas Stoop reads a passage from his favourite book to an audience of one.

The book is titled Dog Man. The audience? A two-year old Husky-Retriever mix named Roy. While a glass wall separates the two, a bond has been instantly formed.

“The benefits of the program are two-fold,” Hannah Sotropa of the Toronto Humane Society explained. “If an animal comes forward and makes eye contact, there’s a greater chance they’ll be adopted than an animal that remains at the back of the cage. So the benefit of that, in and of itself, is huge.”

“The other side is the kid becomes more confident with a reading partner who isn’t going to judge them, isn’t going to give them criticism. This gives them confidence to read to a friend, teacher or someone who might be more intimidating.”

Cassie Conolly told CTV News Toronto her seven-year-old daughter’s reading skills have been slow to develop and that the Reading Buddies program is a “great way for the kids to learn.”

“She’s still a little shy reading in front of other people, so what a better audience than puppies?” 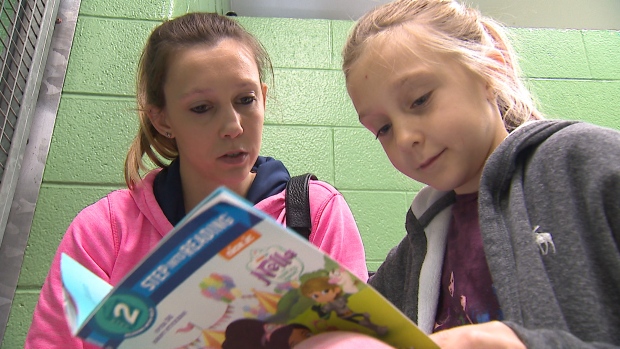 Conolly’s daughter, Mikayla, called the program “cool” and brought with her a stack of books she planned to read to the dogs.

The Toronto Humane Society launched its Reading Buddies program two years ago. It runs every Saturday, usually at a full capacity of 15 children.