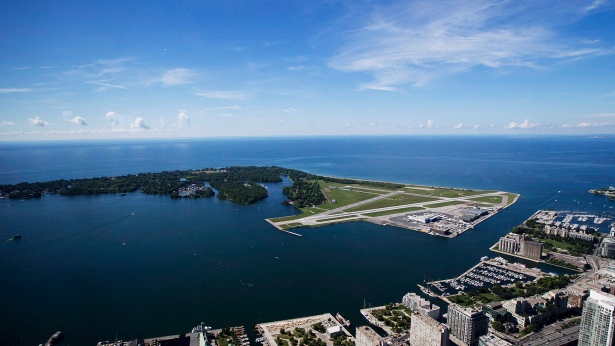 With just about a week to go until election day, a group opposed to expanding Toronto’s downtown island airport is pressuring mayoral candidate John Tory to make his position clear.

While other leading mayoral candidates have clear positions on extending the Billy Bishop Toronto City Airport’s runway and allowing it to fly jets – Olivia Chow is opposed and Doug Ford is in favour – Tory has yet to make a decision, saying more study is needed.

NoJetsTO, a grassroots organization, is against expansion for a number of reasons, including the possible environmental impact and questions about increased noise.

On Sunday, the group’s acting chair questioned Tory’s endorsement of two city council candidates who previously expressed support for growing the airport, Carmichael Greb (Ward 16) and Jon Burnside (Ward 26). “On one of the city’s most divisive issues [John Tory] is only backing candidates from one camp – the pro-expansion side,” said NoJetsTO Actigng Chair Norman Di Pasquale.

Mayoral candidate Doug Ford was also asked about expansion Sunday, at a forum held by the Iranian Canadian Congress in North York. “I’m 100 per cent behind it,” he said. “Imagine living downtown and walking to the airport… maybe taking a quick vacation in Florida, maybe going to Las Vegas.”

He added that it would also create jobs and help the economy. “When my friends fly in on business,” said Ford, “the ones that land at [island] airport tell me ‘that’s the best asset you have.’”

In April, Toronto council voted unanimously to push ahead with negotiations that could lead to expansion, and approved studies on the environmental impact, risk of traffic congestion and other issues.

The airport wants to add about 200 metres on either end of the small island in order to build a longer runway that could accommodate jets. A 1983 tripartite agreement between the City, the Toronto Port Authority (formerly the Harbour Commission) and the federal government outlaws both runway expansion and jets, unless all parties agree to amend it.

Porter Airlines, the airport’s main tenant, is running a public relations campaign outlining its case for expansion. It’s providing lawn signs that say “I’m on board,” to counter lawn signs provided by NoJetsTO.

Jets would allow Porter to reach further destinations than its Bombardier Q400 turboprops currently allow. Porter says they would be “whisper jets,” as quiet as its turboprops.

After Porter launched in 2006, the number of passengers travelling through the airport increased from 26,000 annually to 2.3 million in 2013.

This isn’t the first election campaign where the island airport has been an issue. In 2003, David Miller’s mayoral win was partly attributed to his opposition to building a bridge that would allow the airport to expand. Miller took 43 per cent of the vote, followed by John Tory at 38 per cent.

There is currently only a ferry to carry passengers across the 121 metres of water that separates the mainland from the airport. A compromise made after Miller’s election allowed a pedestrian tunnel to be built. It’s expected to open next spring.