'It's a day of sorrow': Funeral for Milton father killed in GTA shooting rampage

'It's a day of sorrow': Funeral for Milton father killed in GTA shooting rampage

Dozens of mourners gathered in Mississauga today to pay their respects to the Milton father who was killed, along with a Toronto police officer, in a shooting rampage on Monday.

The body of 38-year-old Shakeel Ashraf was brought to Jame Masjid Islamic Propagation Centre of Ontario in Mississauga at around noon on Wednesday.

Family, friends and community members were seen entering the mosque for the service.

Ashraf’s friend and former coworker, who identified himself as Fahad, said Ashraf was a humble and kind person.

“He's a very helpful guy…When anyone needed anything from him, he was always there for them. Even his employees, he brings lunches for them on a daily basis almost, things like that. He was a very generous person,” he said outside of the mosque Wednesday morning.

Hasan Shafiq is a volunteer at the mosque and says the whole community is devastated.

“As a community when one of our members is affected we're all affected as a community, as like a family, like a big family. So, unfortunately, it's a day of sorrow,” he said. 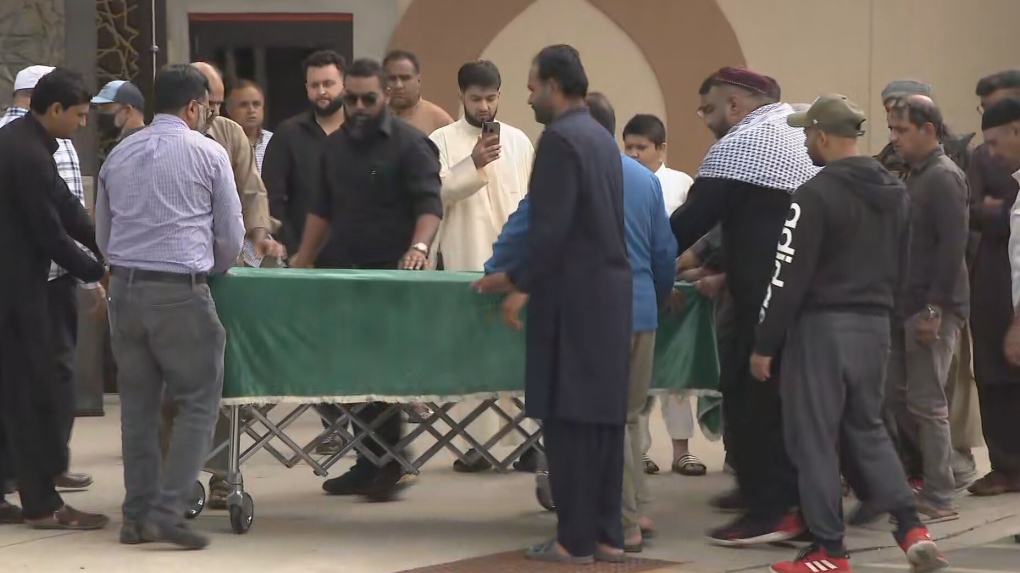 The coffin for 38-year-old Shakeel Ashraf, who was killed in a shooting rampage on Sept. 12, 2022, is taken into the Jame Masjid Islamic Propagation Centre of Ontario in Mississauga.
Ashraf was a husband and father to two young girls, aged 11 and 12.

Friends of Ashraf’s daughters attended the funeral and told CP24 that they are still in disbelief over the tragedy.

“Still in shock because it happened so suddenly and it’s like someone’s whole life can change in the blink of an eye,” one unidentified friend said.

Students at the daughters’ school told CP24 that grief volunteers attended the school on Tuesday to offer assistance to anyone in need.

After the funeral service, Ashraf’s body was set to be taken to Meadowvale Cemetery in Mississauga.

Two others in the shop were rushed to hospital with critical and serious injuries.

TIMELINE: Here is what we know about the fatal shooting of a Toronto police officer and the hunt for the suspect

Arslan Hanif, Ashraf’s cousin, told CTV News that the gunman was a former employee at the shop.

“I don’t know him personally. He used to work at the shop about a year ago and he was there for a short period of time from what I understand,” Hanif said. “I just can’t find a motive, especially for a person like Shakeel. He contributed to the community, he gave his time donating to charities, he was a gem.”

Hanif said his cousin was out for lunch when the suspect first arrived at the auto body shop. He was told that the suspect waited at the shop until Ashraf returned to open fire. 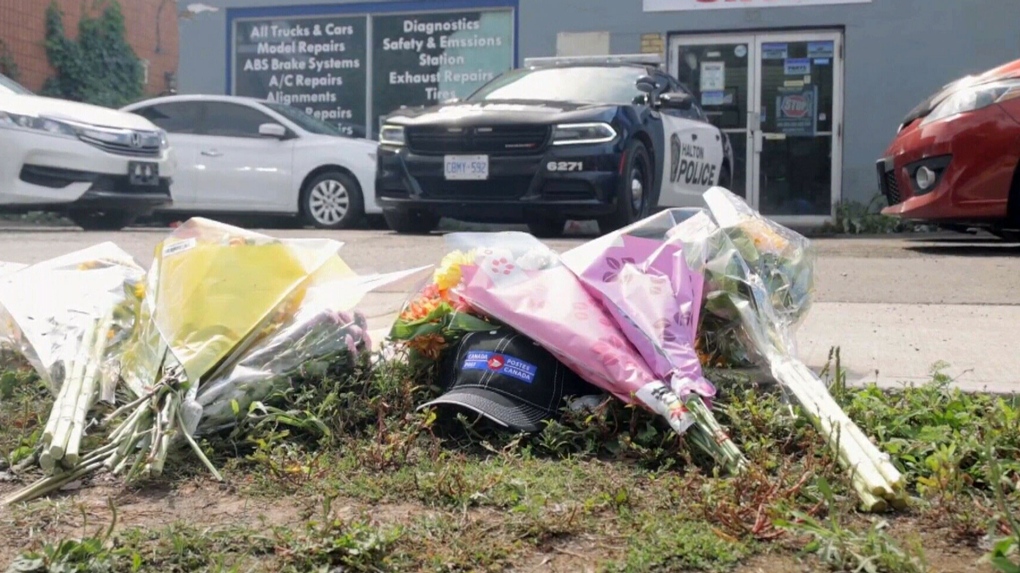 Less than an hour before Ashraf was killed, the suspect shot and killed Toronto police officer Const. Andrew Hong in Mississauga.

Police sources told CP24 that the suspect attended a Tim Hortons where Const. Hong was reportedly sitting at a table eating his lunch after participating in a training exercise with several other motorcycle officers.

The suspect then reportedly killed Hong in what police have described as an “unprovoked,” ambush-style attack, before fleeing the scene in a stolen vehicle.

The suspect was ultimately located a few hours later in Hamilton and was shot and killed by police. That incident is now being investigated by the Special Investigations Unit.

The suspect has since been identified as 40-year-old Sean Petrie.

The motive for the shootings is unclear.

Const. Hong was a 22-year-veteran of the force and was a married father of two.

Toronto police say a book of condolences for Hong will be available to the public to sign in person and online this week.

Funeral details for Hong have not yet been released.

With files from CP24’s Chris Fox and Joanna Lavoie