'It has to stop:' mothers of murder victims march to Queen's Park 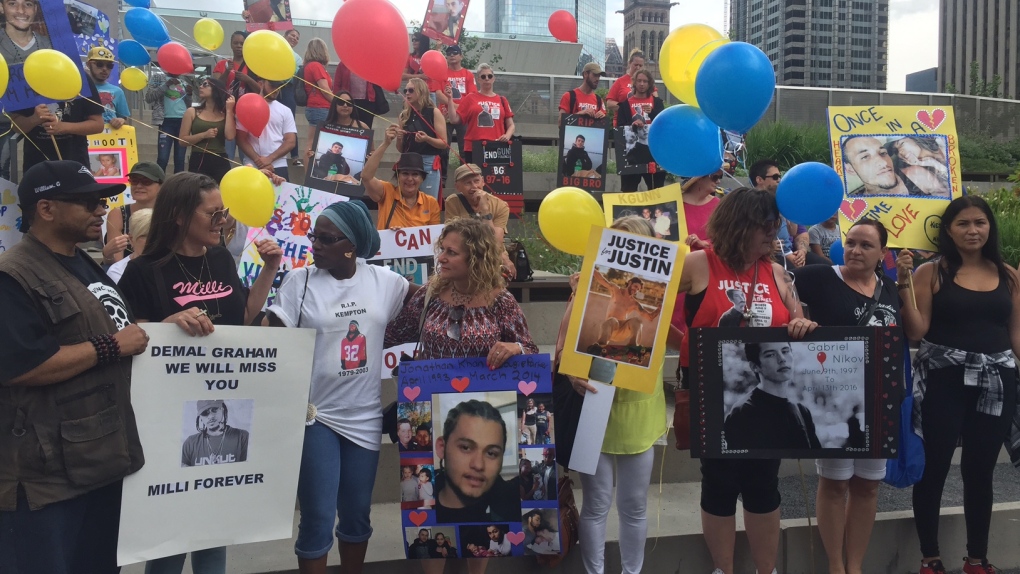 A group of mothers who lost their son's to gun violence are shown in city hall prior to the "Zero Violence' march on Saturday. (Arda Zakarian)

Dozens of people who have been directly impacted by gun violence, including the mothers of five men who were murdered in cold-blood, are marching to Queen’s Park today to demand an end to what they say has become an “epidemic” of violent crime in Toronto.

The mothers of murder victims Quinn Taylor, Gabriel Nikov, Justin Bokma, Kiesingar Gunn and Johnathan Khan are all participating in the ‘Zero Violence’ march. The march began at city hall at around noon and will see participants walk to Queen’s Park for a rally.

“It is really hard just getting through each day. You put on this persona but inside you are dying,” Nancy Bokma, whose son Justin was shot dead inside a Kensington Market after-hours club last July, told CP24 ahead of the march. “It has to stop. Every day we are re-traumatized because we hear about another shooting, another stabbing and another mother who is going through what I am going through.”

Bokma’s son, a professional skateboarder known widely in that community, was shot in the heart after attempting to disarm an assailant who had opened fire inside an after-hours club.

Though more than a year has passed since the shooting, Bokma said that there are still days when she can’t get out bed.

She said that speaking out about the impact that gun violence has on mothers like herself is a way for her to do “something productive” for her son.

“These are senseless, senseless killings that should have never happened,” she said.

The mothers taking part in Saturday’s march all lost their children as a result of gun violence.

Many of their sons were not intended targets and were simply caught in the crossfire when gunfire erupted while others were targeted but for largely unknown reasons.

“The minute that person decided to take my son’s life he left all of the people around him with a life sentence,” said Shauna Brown, whose son Demal Graham was gunned down while watching his six-year-old daughter play in the driveway of his childhood home last month. "Not a day goes by that I don’t think of my son. I'll never be able to hold him again, I'll never be able to laugh with him, I'll never be able to tell him how proud I am of him. All for what?"

Brown said that her son was “completely innocent” and was murdered in borad daylight while he was just trying to be a father.

“Every day that we walk out of our house we are re-traumatized,” she said. “Every day I have to look at the area where I lost my son to such a senseless, senseless crime.”