'It happened because I'm Asian': Toronto ER nurse says she was spit on, verbally assaulted 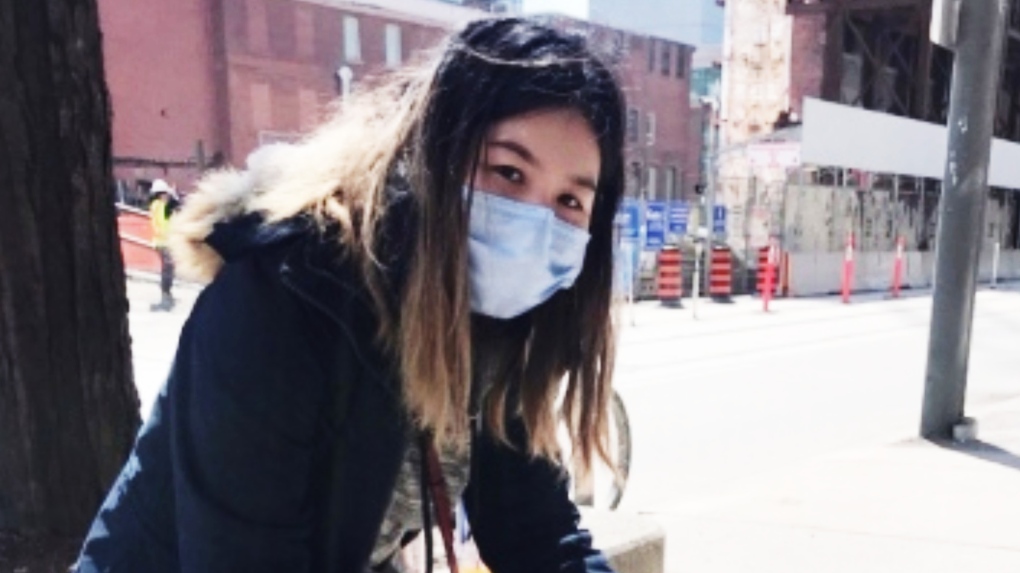 Katherine Cheung said she was the victim of a racially-motivated attack in downtown Toronto Wednesday. (Supplied)

TORONTO -- A registered nurse who works in one of Toronto’s busiest emergency rooms says she was spit on and verbally assaulted in what she believes was a racially-motivated attack.

Katherine Cheung said this was her first week of living in downtown Toronto, after she moved from Markham where she was living with a family member with a compromised immune system.

“Me and my roommate are both nurses and we went for a walk,” Cheung told CTV News Toronto Thursday. Cheung said the pair was in the area of University Avenue and Adelaide Street West on Wednesday when they stopped for something to eat.

“We stopped by a restaurant that was offering a discount for healthcare workers and waited outside for our order.”

That’s when Cheung said a woman in her 60s approached the pair and started yelling.

“Then she started hitting us with an umbrella,” Cheung said, adding that the woman then focused her attention directly on her.

“She told me to go back to wherever I came from and called me racial slurs. Then she came very close to my face and purposely spit on me.”

Cheung said she was wearing a medical mask at the time, but said she could feel the droplets of spit land in her eyes.

Asked why she thought this happened, Cheung said “it happened because I’m Asian and wearing a mask.”

“This person on the street decided to purposely expose me to whatever viruses she possibly had because of my race.”

Cheung said she wiped off the spit and checked into a hospital as a precaution, after filing a police report.

Toronto police confirmed they are investigating but said they are not treating this as a hate crime.

The doctor who assessed Cheung advised her to take a couple days off work as a result of the incident, advice Cheung says her employer fully supports.

“They’ve been very supportive, but I do want to get back to work.”

In the meantime, Cheung says the incident has left her feeling “disrespected and disregarded” but also concerned for her overall safety.

Cheung, who immigrated to Canada in 2003, said this is not the first time she has been the victim of racism, but notes that those incidents have become more frequent in recent months.

“Since the start of COVID-19, it has escalated,” Cheung said. “But not to this level.”

Cheung’s situation is unfortunately not unique.

In late January, at the beginning of the COVID-19 outbreak in Toronto, leaders of the city’s Chinese-Canadian community held a news conference to address what they called emerging discrimination and stigmatization directed at the group.

The news conference followed a number of reports of discrimination against the community, including offensive posts to social media and online petitions containing what city officials labeled as misinformation.

The issue not isolated to Ontario. In Quebec, Montrealers of Asian descent say they have increasingly become the target of racism and discrimination.

Last week, Adam Gagnon was grocery shopping when he said he was verbally and physically harassed because of his ethnicity.

“A man came up to me and said 'You should go back to where you're from with your virus' and he just spit on my feet and left like nothing happened.”

Gagnon said he paid for his groceries and left without telling anyone about the incident.

“I felt threatened and really scared and angry,” he said. “I couldn't believe something like that was happening to me at the moment. I was in shock.”

South of the border, U.S. President Donald Trump has been criticized for calling COVID-19 the “Chinese Virus”, which he says he doesn’t believe puts Asian Americans at risk of retaliation, despite growing reports suggesting that they are facing virus-related discrimination.

Among those reports include an Asian man in a Brooklyn, NY subway car who was yelled at and sprayed with Febreze air freshener. In Los Angeles, a 16-year-old boy of Asian descent said other students had bullied him and accused him of carrying the virus.

Cheung says that she is continuing to monitor for symptoms of COVID-19 while she self-isolates, but hopes sharing her story will bring awareness to the racism against Canada’s Asian communities.

“Since we don’t know when COVID-19 will end, I anticipate that the hate crimes will increase as time goes on,” Cheung said. “When anyone makes a hateful remark or physical aggression towards a minority, they have no idea what this person’s background or story is.”

“And yesterday there were some people that passed by but didn’t offer any assistance; I’m hoping my story will help to change that.”