'It brought tears to my eyes': Bianca Andreescu reacts to fan note written on napkin 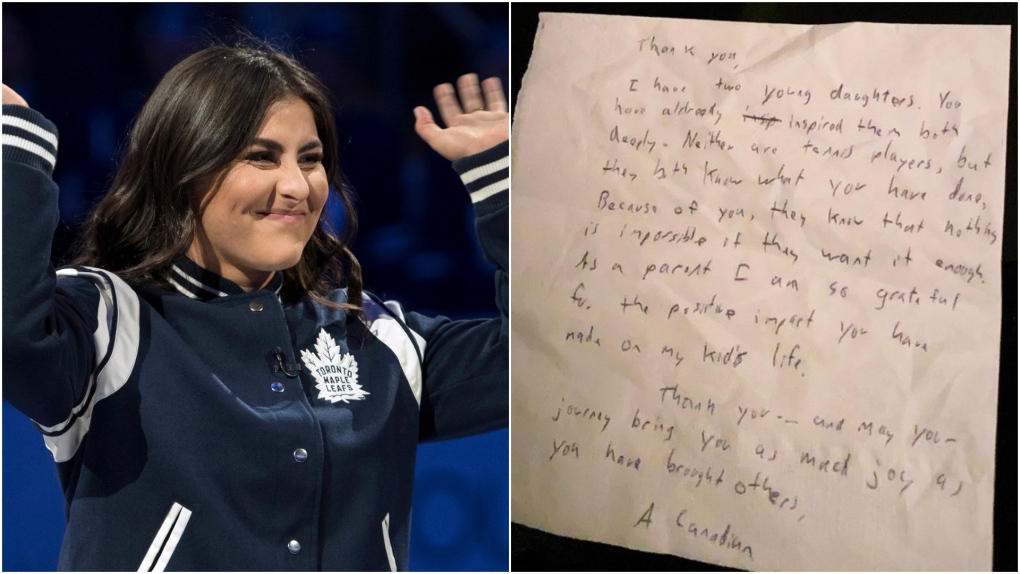 Bianca Andreescu received a note written on a napkin by a fan while on a flight. (The Canadian Press/Fred Thornhill/Twitter)

TORONTO--Tennis superstar Bianca Andreescu said she had tears in her eyes while reading a note written by a fan during a flight on Wednesday.

“The best thing about what I do is this,” the 19-year-old tweeted over an image of the note that was written on a napkin.

“Someone on the plane wrote a very nice msg [sic] on a napkin and gave it to me. It brought tears to my eyes because sometimes I don’t understand the impact that I’ve made, and continue to make in ppls [sic] lives accomplishing what I accomplished."

The tennis phenom made international headlines in September after she became the first Canadian to win a Grand Slam singles title at the U.S. Open.

Andreescu beat out tennis legend Serena Williams 6-3, 7-5 and shot up to number four on the Women’s Tennis Association Tour’s world rankings, soaring from her 152 spot at the end of 2018.

“I have two young daughters. You have already inspired them both deeply,” the note reads.

“Neither are tennis players, but they both know what you have done. Because of you, they know that nothing is impossible if they want it enough.”

The anonymous note, signed “A Canadian”, went on to thank Andreescu for the impact she has had on their children’s lives.

“Thank you—and may your journey bring you as much joy as you have brought others,” the note concluded.

While the note appears to have had an emotional impact on Andreescu, the Mississauga resident added that her accomplishments do not end with the 2019 U.S. Open.

“I’ve always wanted to do good in this world somehow and have a positive impact on ppls [sic] lives. This isn’t where it ends tho [sic], I want to continue to do so in much bigger ways.”

“I’m beyond grateful,” Andreescu added with a heart emoji.