Intersection of King and Spadina reopens to traffic 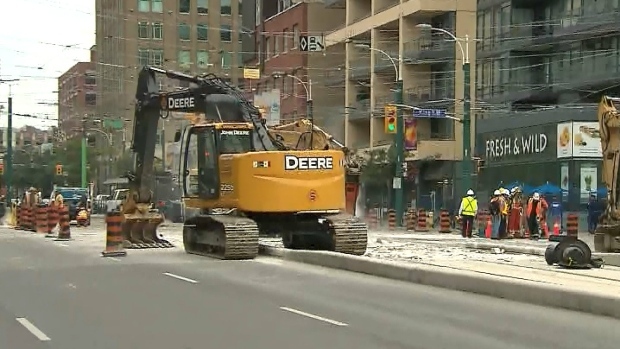 The intersection of King Street West and Spadina Avenue reopened as planned Tuesday morning after a two-week construction project.

Crews were reconstructing the streetcar tracks and part of the road and sidewalks at the busy corner.

However, there may be lane closures "at certain times" as crews complete the last remaining parts of the project, the TTC says.

Streetcar service on the 504 King and 508 Lake Shore lines are back on their regular routes, and special streetcar service to the CNE on the 521 Exhibition East route begins Tuesday from King to St. Andrew stations along King, Bathurst and Fleet streets to Exhibition Loop.

Streetcar service on the 510 Spadina route will resume Sept. 1.

Until then, the 510 Spadina route will be served by shuttle buses between Spadina Station and Queens Quay, the TTC says.