TORONTO – The holster used to conceal a handgun that a suspect later pulled out of his pants while in the back of a cruiser had never been seen by authorities before, Toronto police chief said.

“The type of apparatus that was used to holster the firearm is very unique – we’ve never seen this before,” Mark Saunders told CP24 on Wednesday night.

The police chief commented on the incident after CTV News Toronto obtained video captured inside the cruiser earlier this week. 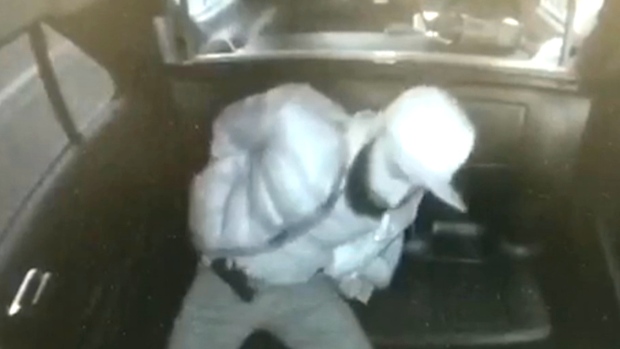 The video shows a man, who was taken into police custody on suspicion of impaired driving in downtown Toronto, in handcuffs squirming with his head down in the backseat of a cruiser. The man is then seen reaching into his pants before pulling out a handgun and placing it between his legs.

Saunders said a pat-down search was conducted before the man was placed inside the cruiser, but his officers only became aware of the weapon when they heard “the sound of something hitting the floor in the rear seat.”

“Officers stopped and opened the rear door of the police vehicle and discovered a semi-automatic pistol on the floor in front of the accused,” Saunders said in a news release issued on Tuesday morning.

“The firearm was secured, an additional search was conducted and the individual was brought to 51 Division for breath tests and processing.”

Following the discovery of the weapon and an analysis of this never-before-seen holster it was placed in, the police chief said a safety notice was put out to warn frontline officers.

“We put out an officer safety bulletin so that my frontline people can see that this is something that is now out in the public so that we as an agency will look at this and then we will adapt our training to that and say ‘these are the means in which people can carry a firearm now,’” Saunders said. 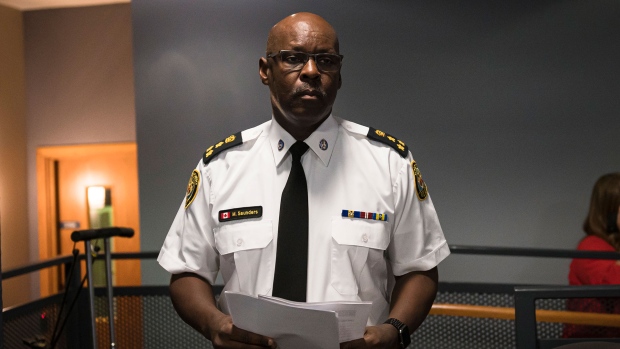 “There is that added risk and knowledge base that we’ve learned from this but we will look at whether or not this was a training issue or whether or not it was a discipline issue.”

‘Full investigation’ into leak of video

The police chief added on Tuesday that a “full investigation into the leak of the in-car camera evidence” is also underway. At the time, Saunders called the sharing of the video with members of the media “a clear breach of protocol and procedure.”

“It compromises the safety of others,” he said. “In this particular case, this person that we’ve arrested with a firearm, there is no hope of that person ever being an informant to us, there’s none, because now it’s out there, it’s international.”

“The idiot videoing this and sending it out to his friends or her friends and so on and so on jeopardizes the community, jeopardizes officers and jeopardizes any opportunity for us to move these types of investigations further.”

The suspect in this case, identified by officers as Mississauga resident Ali Showbeg, now faces nine charges in connection with the investigation, including eight firearm-related offences.

None of these charges has been proven in court.

The 38-year-old is scheduled to appear in court on Nov. 4.